A stable internet connection at home is something that many of us take for granted these days, but there are some situations where your internet router might have trouble. Picture this — you’re working on your laptop from home on a bright Summer day, longing to be outside, and when you bring your laptop outside to do some work in the sunshine you promptly lose your internet connection. Or maybe it’s less elaborate than that, and you just have a large home with many floors and rooms, and you find that many of them are internet dead zones because of the distance from your router.

If you’ve ever found yourself in one of these situations, you should think about using a Wi-Fi extender to increase the reach of your internet connection. They do a great job of bringing your internet connection to places that they couldn’t normally reach with just a router — at the cost of some internet speed depending on where you place it.

We’ve put together this list of some of the best options you can find on the web, including picks that are great for larger homes as well as the outdoors. You can read all about how Wi-Fi extenders work at the end of the article, and we’ve also included some of the best ways to use them and a list of features you should be on the lookout for while you shop. 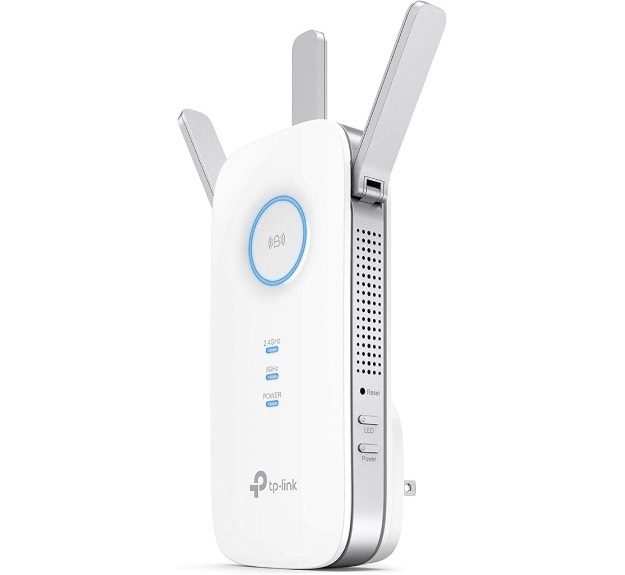 This extender has one of the best square foot ranges in this price bracket and is the only single unit that supports this many devices on this list, making it the best option here.

If a long range is what you’re after, consider the TP-Link AC1750 Wi-Fi Extender RE450. It has three antennas that extend your internet to dead zones in your home, and it’s built to handle playing games or streaming movies in 4k resolution. You can also connect up to 32 devices to this unit, making it great for families with lots of tech that use the internet.

This model comes with three different connective options, so if you’re looking to connect to your internet through more than just Wi-Fi this is a great choice — if you use an ethernet cable, for example, you won’t get the same amount of speed loss typical with extenders connected over Wi-Fi. 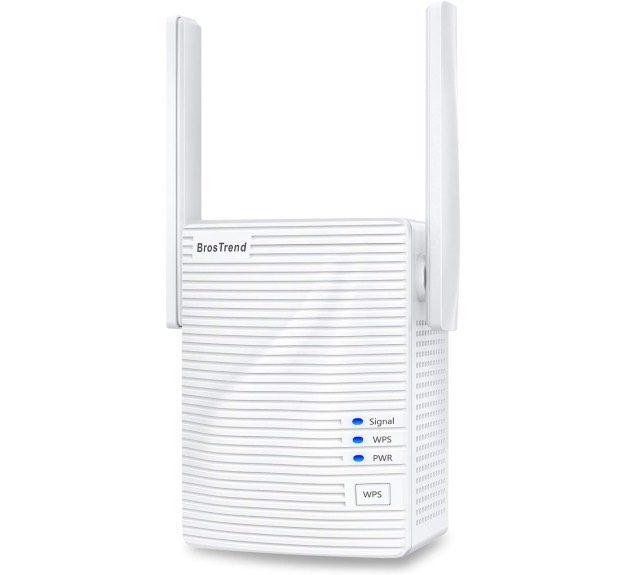 This model is a close runner up, and it offers a long square foot range, fast data transfer speeds, and the option to connect to your router via an ethernet cable.

The BrosTrend Wi-Fi Range Extender is built with two powerful antennas to increase the Wi-Fi range in your home, and it’s easy to use because it works with any router. This model can also be used as an access point, so you can connect it to any internet equipped ethernet ports to extend coverage; you can even bring it with you to a hotel to make your own Wi-Fi network, or connect it to a gaming console for quick speeds.

Some users noted that their internet speeds dropped significantly more than with other extenders they’ve used, so its particularly important to place this one in a spot without many obstacles. This model has a signal light that will tell you if it’s placed in the optimal area. 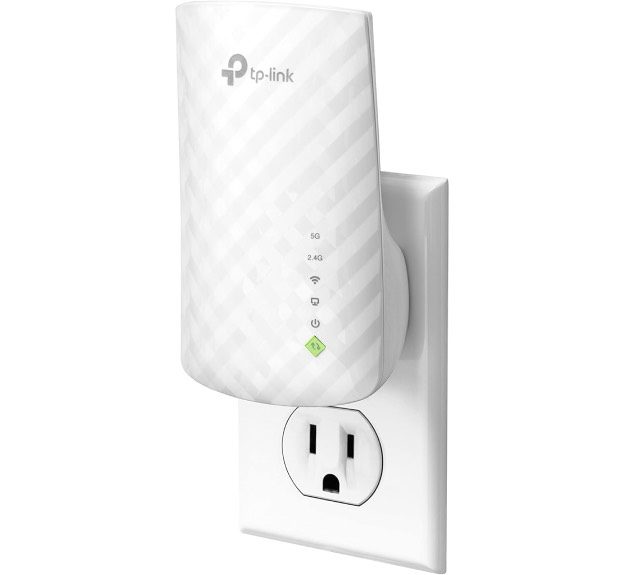 If you’re shopping on a budget for a new extender, this is the best option for you because you won’t be sacrificing range or too much speed for the cost.

Even though it comes at a lower price point, the TP-Link AC750 Wi-Fi Extender RE200 still does a great job of extending your Wi-Fi range and extending your signal past walls and obstacles. You’ll get up to 1,200 square feet of coverage, and it’s a dual band model meaning that it can operate on both 2.4Ghz and 5Ghz frequencies depending on what you need. You’ll get what you pay for with the build quality though, this model is less durable than the others on this list and tended to drop connections more often. 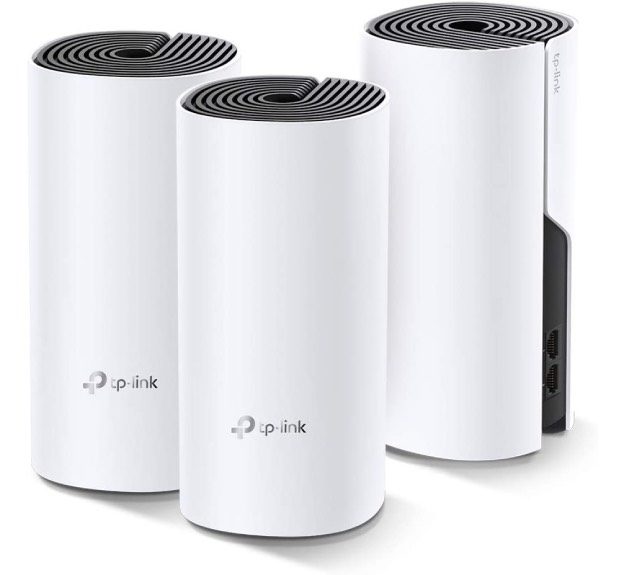 Perfect for anyone with an extra-large home, this extender can extend your range longer than any of the other Wi-Fi extenders listed.

Larger houses might need many more Wi-Fi extenders to maintain a strong internet connection throughout, and luckily the TP-Link Deco Whole Home Mesh Wi-Fi System comes in a pack of three for anyone in this boat.

Anyone in the household can download the TP-Link deco app to set up the extender with ease. For any parents out there with night owl children, this model also comes with parental features so that you can limit a user’s online time and block inappropriate websites. 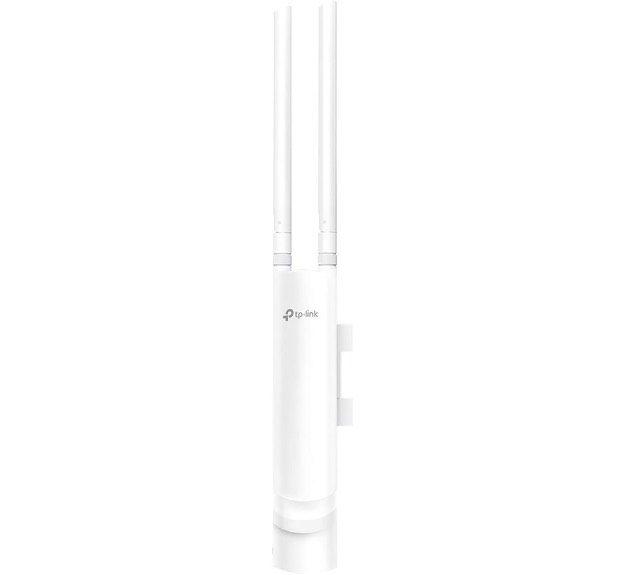 With a weatherproof enclosure and the ability to operate within a large temperature range, this is the perfect option for the outdoors.

If you want to bring your Wi-Fi connection outside your home, look no further than the TP-Link Omada N300 Gigabit Wireless Access Point. It’s waterproof, won’t be affected by dust, and it’s even lightning proof, which means that you can bring your internet outdoors without any fear.

One of the main setbacks with this model is that it requires a connection through ethernet to be used as an extender; it can’t just connect to the Wi-Fi from your router and extend that signal. But on the bright side, it comes with a POE (power-over-ethernet) injector, which means that your ethernet cable will be what powers the device. Since it won’t need to connect to a plug, it can be easier to route and place somewhere in your backyard.

How Do Wi-Fi Extenders Work, and When Should I Use One?

If you live in a large home and find that you lose Wi-Fi connection in certain areas of your house, then a Wi-Fi extender could be the right fix for you; they’re great for extending your wireless internet range to higher floors in your house, as well as outside in your backyard. While they’re great for fixing internet dead zones in your house, they won’t give you blazing fast internet speeds; because your Wi-Fi is going through an intermediate step, you can expect the speed of your internet to drop by about half when you’re connecting through the extender.

It’s generally a good idea to place it somewhere halfway between your router and the internet dead zone. Some extender models can be connected through an ethernet cable, which solves these speed issues, but then you’ll have the extra task of wiring and camouflaging cables in your home.

Features to Look for:

Wireless Specification: When choosing a Wi-Fi extender, you’ll need to make sure that it will be compatible with your router; the most common ones you’ll find on the market will be varying levels of 802.11 compliant, but the newest technology is specifically 802.11ac. The newer standard is backwards compatible when looking from extenders to routers, but you won’t be able to use an older extender for a newer router. For example, if you have a newer router that is 802.11ac compliant, then you won’t be able to use an older 802.11 extender with it. When in doubt, look for an extender with either ac after the number or with the same letter as your router.

Frequency: There are two main frequencies you’ll see Wi-Fi extenders running on — 2.4GHz and 5GHz. At a basic level, 2.4GHz connections are better for longer range and travelling past obstacles, but 5GHz is better for faster speeds, and works more efficiently across less distance. If you see an extender listed as dual band, it means that it can operate on both frequencies.

Ethernet Port: If you know that you want to connect your extender to your router with cables to make sure you don’t get that much speed loss, you’ll need an extender that comes built with an Ethernet port. Some models can even connect through USB, which can also act as a power source without plugging it into the wall.

Do you own one of these? Do you agree with the review? Did we miss your favourite Wi-Fi extender? Comment below and let us know!