The Best SSDs for Your Devices

When SSDs were first introduced onto the market, they were significantly more expensive than traditional HDDs. Since then however, the prices have become much more affordable and larger capacities are now readily available. Although they mainly appeal to PC gamers, we’d argue SSDs should belong in every computer, so long as you can afford it.

Along with offering much faster performance, SSDs are also much more reliable since they don’t have any moving parts. Standard HDDs typically have a lifespan of three to five years, depending on your daily usage. SSDs on the other hand, are known to last quite a bit longer, with some professionals estimating around 10 years. Again, this is largely dependent on your usage, but generally you can safely assume an SSD will last you quite a bit longer than a standard HDD.

Naturally this comes at a price, and when comparing SSDs to HDDs, you’ll typically end up with less storage capacity at the same price with an SSD. But when it comes to accessing your operating system, programs and games, an SSD’s performance is very noticeable. If you need additional storage for your files that you don’t often access, you can always purchase a second HDD or an external hard drive and store those there.

With more and more manufacturers now producing SSDs, there are quite a number of options out there. In this article, we’ll discuss our top picks for SSDs and explain in detail what you should look for when shopping for one. 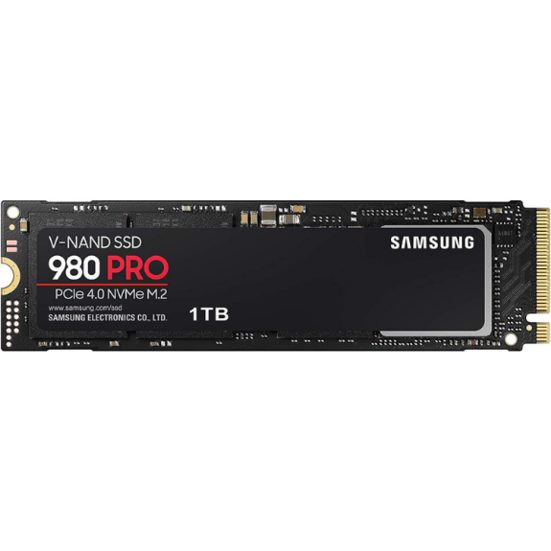 One of the biggest reasons to purchase an SSD is for speed. And when it comes to performance, the Samsung 980 PRO delivers with read speeds up to 7,000 MB/s. It’s an NVMe M.2 2280 SSD and you’ll need to ensure your motherboard supports PCIe 4.0 before adding this to your cart and checking out. If your computer is able to take advantage of this SSD, you’ll quickly notice the difference if you’re upgrading from a traditional HDD. For gamers, this is the SSD you want to go with.

Samsung uses nickel coating on the 980 PRO to help manage the controller’s heat level, along with a heat spreader label for effective thermal control of the NAND chip. The drive manages heat on its own thanks to the company’s thermal control algorithm, which results in reliable performance and minimal performance fluctuations during extended periods of use.

Along with the drive, Samsung gives you access to its Magician software, which is a suite of user-friendly tools so you can keep your drive’s firmware updated, monitor its health and speed. You can even boost performance, if necessary, through the software. 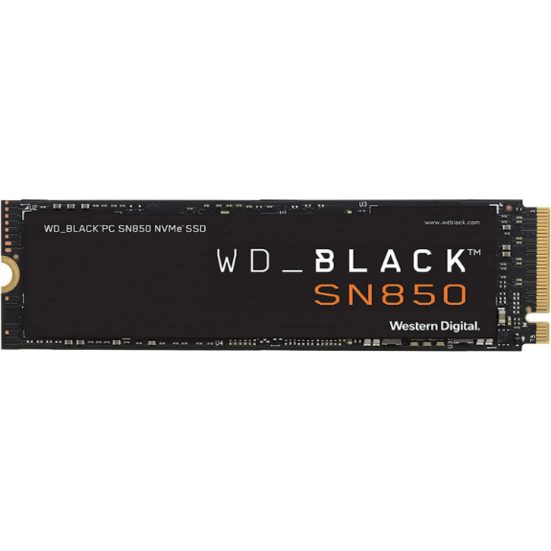 Realistically you can’t go wrong with either of our top two choices as the Western Digital WD_Black SN850 offers comparable performance to our top pick. This NVMe M.2 2280 SSD can reach up to 7,000 MB/s read speeds and 5,300 MB/s write speeds, but you’ll need to make sure your motherboard can support PCIe 4.0. Designed for PC gamers, you can actually customize this SSD with RGB lighting through Western Digital’s WD_Black Dashboard on Windows to match the rest of your computer, if you purchase the version with a heatsink.

This SSD is engineered and built with the company’s 3D NAND to deliver reliability and dependability you need for long gaming sessions. You can also use the WD_Black Dashboard to monitor the health of your drive and optimize performance with a special gaming mode. Choose from 500GB, 1TB and 2TB sizes.

Not everyone has a computer that supports NVMe M.2 SSDs, so if you’re one of those people, you’ll need to get a SATA SSD. Our top pick for a SATA SSD comes from Crucial, a company that has been manufacturing computer memory products for decades. The MX500 SSD is equipped with Micron 3D NAND, which uses a minimal amount of power while delivering high performance.

SATA SSDs won’t be as fast as NVMe M.2 drives, because they’re older technology, but this recommendation still delivers up to 560 MB/s read speeds and 510 MB/s write speeds. The drive also features ‘Integrated Power Loss Immunity’ which attempts to preserve all your saved work if power unexpectedly goes out on your computer. To keep your data safe and secure, it uses AES 256-bit hardware-based encryption.

Perhaps the best-selling point for this drive is the fact that Crucial backs it with an impressive five-year warranty.

Want faster performance than a traditional HDD but don’t have the funds to get one of the high performance options? Check out Kingston’s A400 SSD which is more affordable while still delivering impressive performance. Enjoy read speeds up to 500 MB/s and write speeds up to 450 MB/s, which will be a noticeable improvement compared to a standard HDD.

This particular SSD is shock- and vibration-resistant, so they’re a great option for a laptop as well—assuming you have room for a SATA drive. If not, Kingston also offers the A400 in NVMe M.2 form, although capacity choices are limited.

As a budget-minded recommendation, storage capacity options are a bit limited at 480GB and 960GB. But at this price, the SSD is still a great upgrade even if you’re only using it for your operating system and programs. 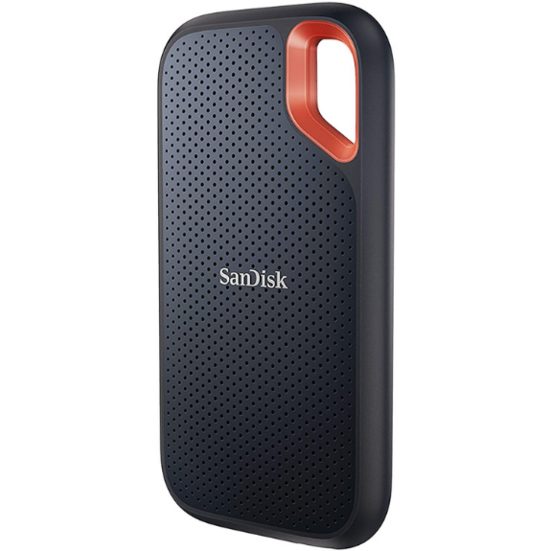 If you’re often on the go and need a fast hard drive to take with you, check out this external SSD from SanDisk. This option is ideal for photographers and videographers who often travel for assignments, or even outdoors adventurers who always have a GoPro closeby and need a place to store all their videos. The SSD connects via USB-C and is capable of read speeds up to 1,050 MB/s and write speeds up to 1,000 MB/s.

Since this is a portable SSD, SanDisk anticipates you’ll be taking it on the road and has designed it with that in mind. It’s protected from drops up to two meters and has an IP55 rating for water and dust resistance. Sporting a rugged and stylish design, the SSD’s housing even incorporates a carabiner loop so you can secure it to your belt loop or backpack. A durable silicon shell protects the drive itself.

SanDisk includes a five-year limited manufacturer warranty, and although it won’t protect you from data loss, there is some peace of mind if the drive does prematurely fail.

This recommendation brings us back to an NVMe M.2 2280 SSD, offering read speeds up to 5,000 MB/s and write speeds up to 4,400 MB/s. It comes from Seagate, an extremely reputable manufacturer of hard drives. Again, you’ll want to make sure your motherboard can accommodate PCIe 4.0 before purchasing the FireCuda 520 PCIe Gen4 SSD.

Like other NVMe SSDs we’ve recommended, Seagate offers its SeaTools so you can monitor, test and analyze your drive. It might not reach the same speeds as other NVMe M.2 recommendations on our list, but it’s a bit more affordable and for some users, they might not ever notice the difference. 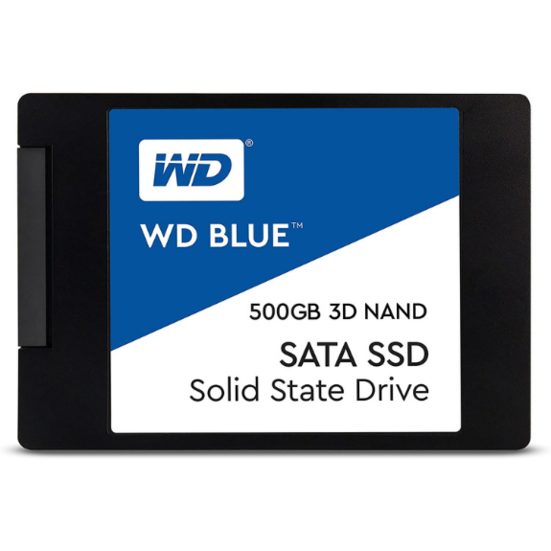 If you have an old hard drive that needs an extra boost of speed or if you spend lots of time playing open world games on your computer, this WD Blue 3D NAND tech can provide you with read speeds of up to 560MB/s and write speeds up to 530MB/s so you can do all the things you love without having to buy a whole new system.

The WD Blue provides up to 4TB of storage capacities and is available in both standard 2 ½” and M2 sizes, which means you could even update game console systems like the PS4 while drawing 25 percent less power than previous generations to allow for longer, smoother play or work time. 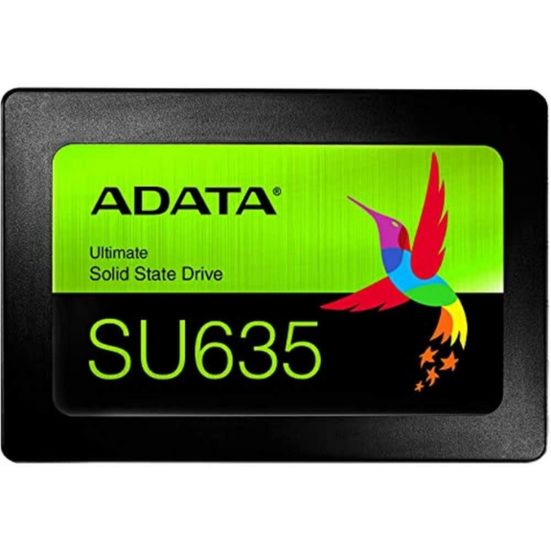 Similar to the Crucial MX500, the ADATA Ultimate SU635 internal SSD is a budget friendly option for users whose computers don’t support NVMe M.2 SSD’s. With 240GB, 480GB and 960GB of available storage capacity, read speeds of 520 MB/s and write speeds of 450 MB/s, these SSDs are a more affordable option that can provide you with faster and smoother processing and file transfers.

With a free downloadable ADATA SSD file management and data migration software, as well as LDPC error correcting code to help you keep all of your files safe, this SSD has a lower power consumption and noise level than previous models.

What is an SSD?

Short for solid-state drive, SSDs are storage devices that are quickly replacing traditional hard disk drives (HDDs). SSDs use flash-based memory, allowing them to process data incredibly fast. More importantly, since they use a NAND flash memory, there are no moving parts in an SSD, which means they’ll last longer and are less prone to failure.

Do I Need an SSD?

Well, if you’re complaining that your computer is slow, a great place to start is by upgrading the hard drive to an SSD. Keep in mind this isn’t a seamless solution, you’ll start with an empty drive which means you’ll have to reinstall your operating system and software. If you’re not comfortable doing that, you can always install an SSD as a secondary drive and install your programs and games to it. But to take full advantage of an SSD’s speed, you’ll want your operating system installed onto that drive.

Whether or not you really need an SSD ultimately depends on you. Aside from noticeably faster speeds, you also have the benefit knowing that your drive isn’t going to fail within a few years, which is possible with a traditional HDD.

What Are the Different Formats of SSDs?

When SSDs were first introduced, they used Serial Advanced Technology Attachment (SATA) to connect to a computer’s motherboard. That involves a SATA cable and mounting the drive somewhere inside your computer. The problem with SATA is that it is restricted to speeds up to 6 GBit/s, which while that is quite a bit faster than a traditional HDD, it’s not as quick as what NVMe/PCIe SSDs offer.

The latest SSDs on the market are small chips that almost resemble RAM and they get installed directly onto your motherboard. NVMe M.2 is capable of up to 16 GBits/s of raw throughput, if you want to compare them to SATA SSDs.