Many gaming enthusiasts prefer to build their own computer setups, but this isn’t always an option if you don’t know what you’re doing or would rather have the convenience of a pre-built model. If you’d prefer to buy an already assembled gaming desktop, we’ve put together this list of some of the best options you can find on the market right now so you can get right into playing your favourite games. We tried to keep accessibility in mind, so we’ve prioritized mid-range desktops — using the most powerful components is much more cost effective when purchasing the parts individually, versus pre-built. Also keep in mind that pre-assembled PCs from some brands can go out of stock fairly quickly, so if you see one that’s unavailable try to find one from the same brand with similar specs.

There are many different inner components of your new desktop that’ll influence the performance you’ll get, and they can get decently complicated for anyone who hasn’t worked with computers before. We’ve put together a little guide at the end of this article that will help beginners understand the different computer components, and what you should be looking for in your new set up. While it won’t be the most comprehensive guide around, you’ll be well on your way to knowing which computer you should be considering. Without further ado, here’s the list! 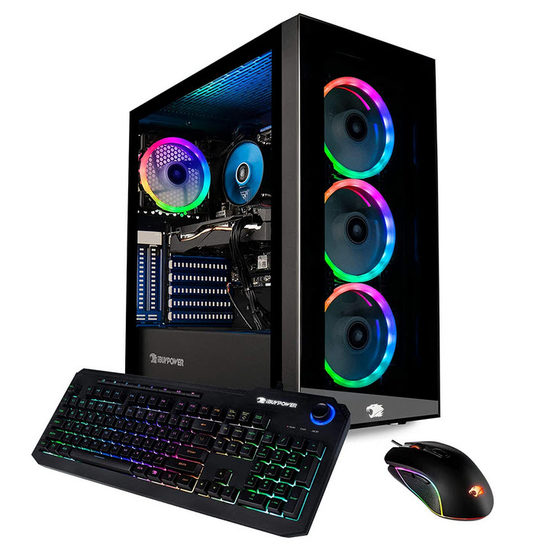 The iBUYPOWER Gaming PC Computer Desktop Element 9260 is truly a beast of a PC; it has a top-of-the-line CPU and GPU, and it will be able to run most modern games with high settings.

You’ll feel like a real gamer with this model’s glowing lights and tempered glass panels, and with these amazing specs you’ll be able to play most modern games with high settings. If you’re planning on streaming online while you play, the 8-core processor will definitely help you out. It’s also great that this PC comes with both a HDD and an SSD, so you can store all your games and programs on the SSD for quick loading times, and the rest of your files on the HDD to save room for your games. 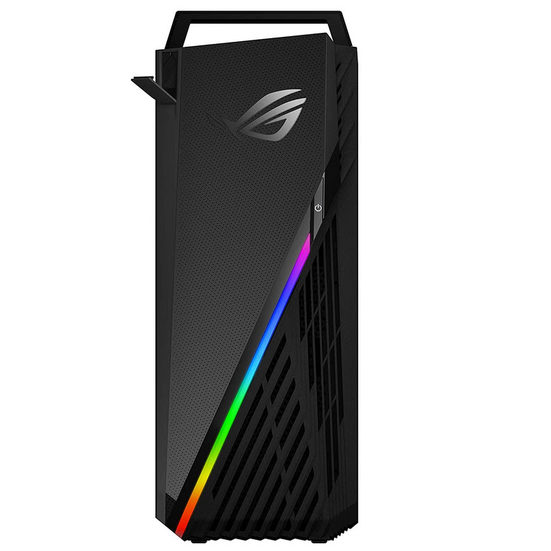 The ROG Strix Gaming Desktop PC is another great option for you to consider because it’s affordably priced but still has some serious computing power.

You’ll get great frame rates and smooth gameplay on this computer while you’re using medium to high settings on modern games, and just like our last pick, this one also comes with both kinds of storage, so you’ll be able to have quick loading times in your games without worrying about running out of SSD storage because of your other files. 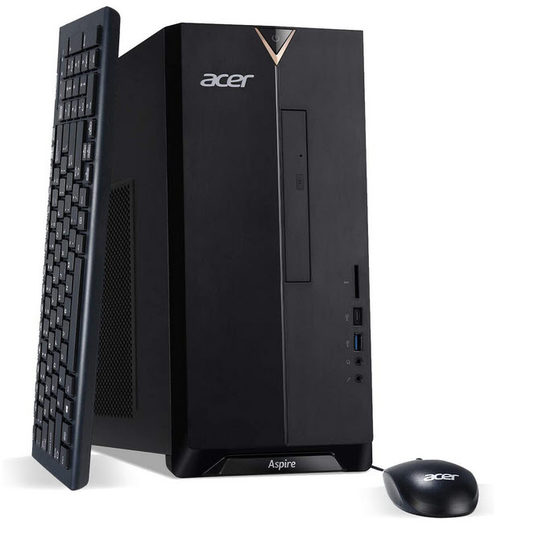 If you’re looking for an affordable entryway into the world of gaming PCs, we think that the Acer Aspire Desktop TC-895-UA92 is a good place to start. It still has a decent amount of processor cores, so you probably won’t encounter many bottlenecks in performance.

Keep in mind that this PC has an integrated graphics card, which means that its performance won’t be as good as higher end options — you’ll probably need to lower your settings way down depending on what games you’re playing, but for many new gamers it’ll be just enough to play older games, or some newer games on low settings. 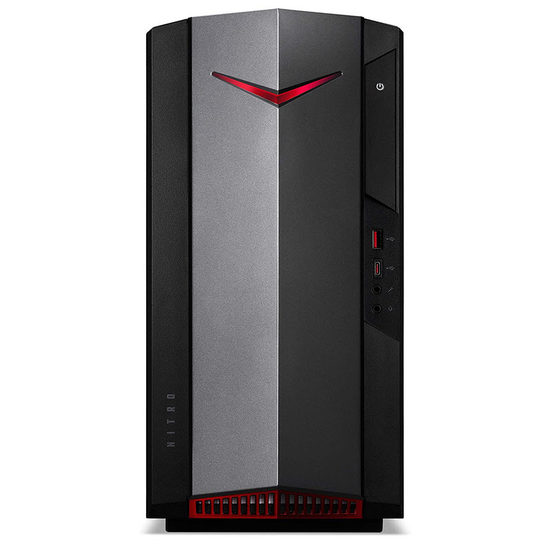 While our last pick was more of a budget choice for beginners, the Acer Nitro Gaming Desktop, Ci5-10400F is a better choice if you have a little bit more money to spend because of its dedicated graphics card. You’ll be able to play most of the games you want with this pre-built PC, and you should get decent frame rates depending on the graphics settings you want to play with; many buyers found they could reach 60 fps for their gaming, which is the max that some computer monitors can even display.

If you find that you’re enjoying your computer and want to upgrade your components, that’s totally possible! Just make sure that the graphics card you want to upgrade to is compatible with the motherboard. 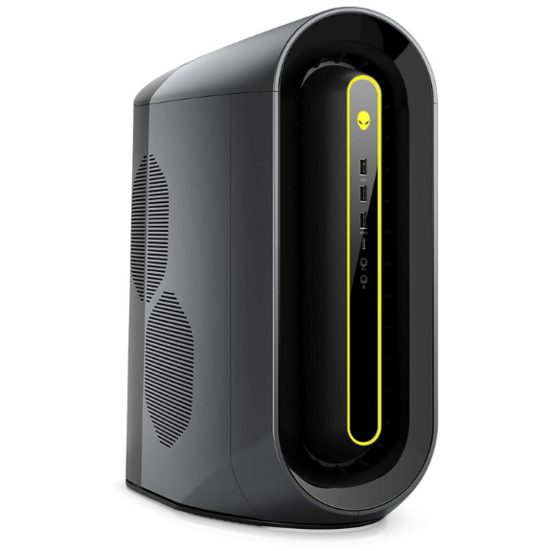 If you’re a gamer and never owned an Alienware PC in your life, maybe now’s the right time — this one comes with powerful internal components that’ll give you great performance in any modern game.

This PC is also designed with a modern look that you won’t find in many other towers on the market, and it’s built with an improved airflow pattern, which makes sure air can move more efficiently through the tower to cool down your PC during times of high use. You’ll also love the AlienFX LED lighting, which is compatible with over 180 games and can enhance your immersion. 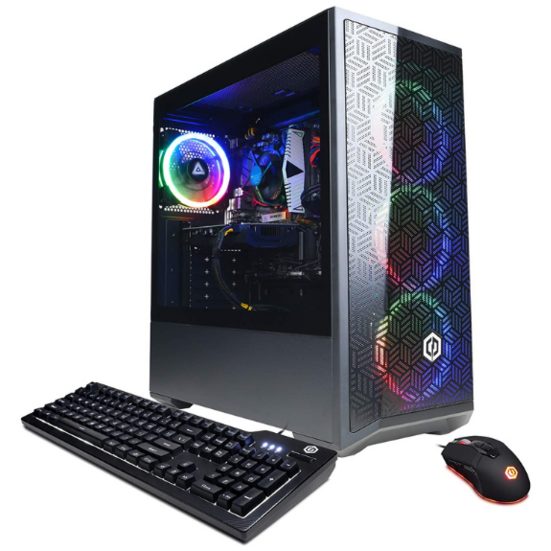 This popular PC is on the pricier side, but based on the parts you’re getting, it’s totally worth it — modern games will run like a dream, and it’s VR ready as well, so you can jump into your games.

CyberpowerPC is known for their strong internal components at affordable prices, so it’s no wonder buyers are flocking to this model. It’s optimized for use with HTC Vive and Oculus Rift for virtual reality gaming, and there’s also plenty of processor cores and RAM so all your games should run smoothly and speedily. Even intensive tasks like video editing will be a breeze.

Here’s another great option worth considering, that’s affordably priced and will get the job done — just don’t expect to play games on ultra, or maybe even high settings depending on the game.

The tower itself is quite compact, which makes it a great option for anyone without much room around their desk, and it’s built with many connectivity options in mind, like a front side media card reader and easily accessible USB-A ports. It does have integrated graphics, which sets it back a little, but if you’re gaming on a budget, this will probably still be viable for what you need. 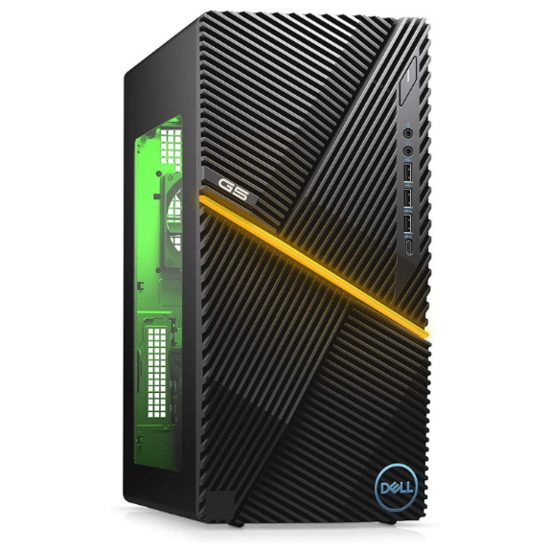 Don’t count out this gaming desktop — it might be a little pricey, but you get what you pay for, since it has strong internal components that’ll run your games in high quality, and still get good FPS.

The design of the tower is quite compact as well, which means it won’t take up too much space on or under your desk, and there are bright LED lights inside and a transparent window panel on the side for an elevated look. It’s easy to upgrade the components down the line, if you ever find you want something more powerful in the future, but for the games currently on the market, you’ll find that this’ll fit the bill.

What to Consider in a Graphic Card

If you’re looking for a computer for gaming, the graphics processor (GPU) is what will do most of the heavy lifting for you. Buying a gaming computer with one of the newest gaming cards on the market is the best way to ensure you’ll be able to play new games in the future, as hardware needs for video games keep getting increasingly advanced. Higher-end cards are also more capable of playing games in 4k resolution, as well as in VR. Many pre-built options come with middle of the line cards, though, but a great thing about PCs is that you could purchase a new graphics card and install it yourself — just make sure it’s compatible with the rest of your computer components.

Another thing to keep in mind is that generally, you’ll want a dedicated GPU instead of an integrated GPU. Integrated graphics cards are built into the processor, and they share memory with the CPU instead of being dedicated to graphics. While you’ll still be able to play some games with an integrated card, they’re by no means top of the line, and you might need to play with your graphics settings on low in most games.

The CPU is probably the next important factor in gaming performance next to the GPU. One of the ways performance is measured is by how many cores your processor has — each core means that it can receive instructions from one computing task. Having more cores means your computer can handle more tasks at once; some of the highest-level processors have 32 cores, but generally for gaming anywhere between four and eight will be enough. If it ever comes down to purchasing a more expensive CPU or GPU, you’ll want to prioritize the GPU for gaming.

There are two main CPU brands competing for the top spot: AMD and Intel. Intel used to be the more preferred brand, but lately AMD has been improving their chips immensely, and now they can offer you better performance based on the cost. With that being said, both chips are completely viable and will be capable of playing your favourite games.

RAM: Random access memory is basically like your computer’s short-term memory, and it’s where your computer stores temporary data that it’s using and needs to access currently or soon. It’ll be measured in gigabytes (GB), and essentially having a higher RAM means your computer has enough memory to use more programs at one time, so if you’re switching between your game and internet browser you won’t experience bottlenecks. Having 8GB available will be enough for entry level gaming, but you’ll want at least 16GB for more intensive games.

Storage: There are two kinds of storage you’ll find right now: a hard disk drive (HDD) or solid state drive (SSD). SSDs are the newer technology, and allow you to access your data much faster, which can reduce loading and download times immensely for any games you have stored on it. HDDs are slower, but they’re cheaper so you can get much more storage for the same price compared to SSDs. Some computer options have both an HDD and SSD, so you can use your computer programs and games on the faster SSD while storing most of your photos, files etc. on your HDD.

Motherboard: This piece of tech is what houses the various cards and chips that your computer uses, and thus is the most important part of figuring out which components will be compatible. If you’re planning on upgrading your video card after purchasing one of these pre-built options, make sure that you know which video cards will be compatible with the motherboard.

We're always looking for more feedback! If you already own one of these pre-built gaming PCs and would like to share your experience with it

About the Author: Michael Pilon