To do this, we surveyed a total of 2,700 Canadian consumers over the course of 2 surveys, 3 months apart. For the first survey, we asked consumers about their holiday shopping spending plans, shopping schedule, gifts they plan to purchase, and plans regarding Black Friday / Cyber Monday. About 3 months after our initial survey, we followed up with questions to see if people’s spending plans have changed, and why.

People favour shopping online this holiday season with 95% of respondents indicating that they will be making 50% or more of their purchases through online channels. From this group of online shoppers, more than two-thirds will make 75% to 100% of their purchases online. 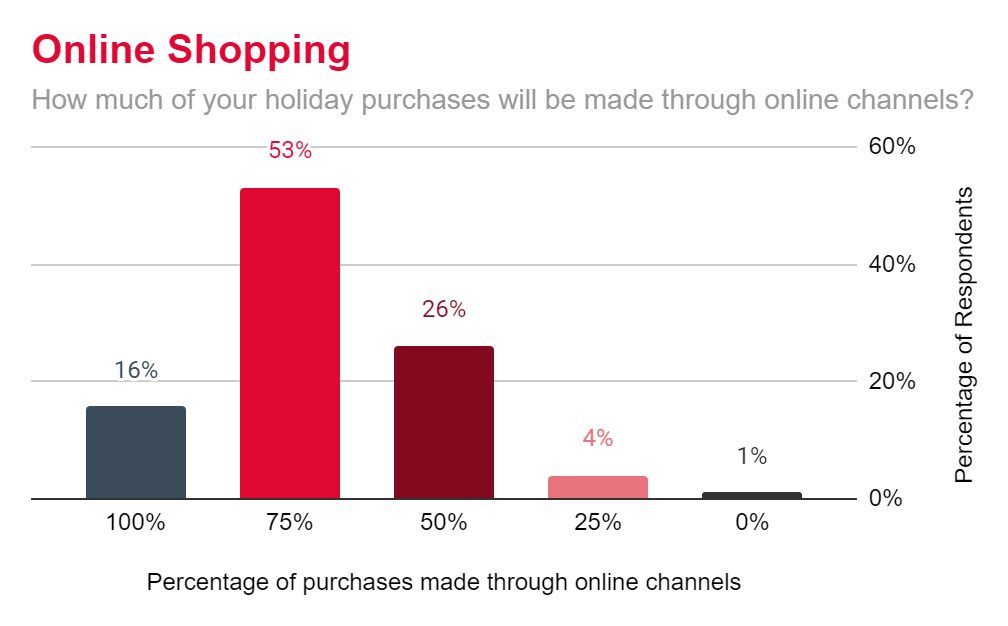 
Who are People Shopping for this Holiday Season?

This holiday season, a majority of people are shopping for their parents (65%) and significant others (62%).

58% of shoppers plan to buy gifts for children. Meanwhile, only 43% and 40% of respondents intend to buy gifts for siblings and friends respectively. There is a 21% difference between the top two and the bottom two types of people shoppers are buying for this holiday season.


Most popular types of gifts being purchased this holiday season

Clothing, Shoes and Apparel is the top shopping category for shoppers this holiday season with 65% of respondents intending to purchase from this category. 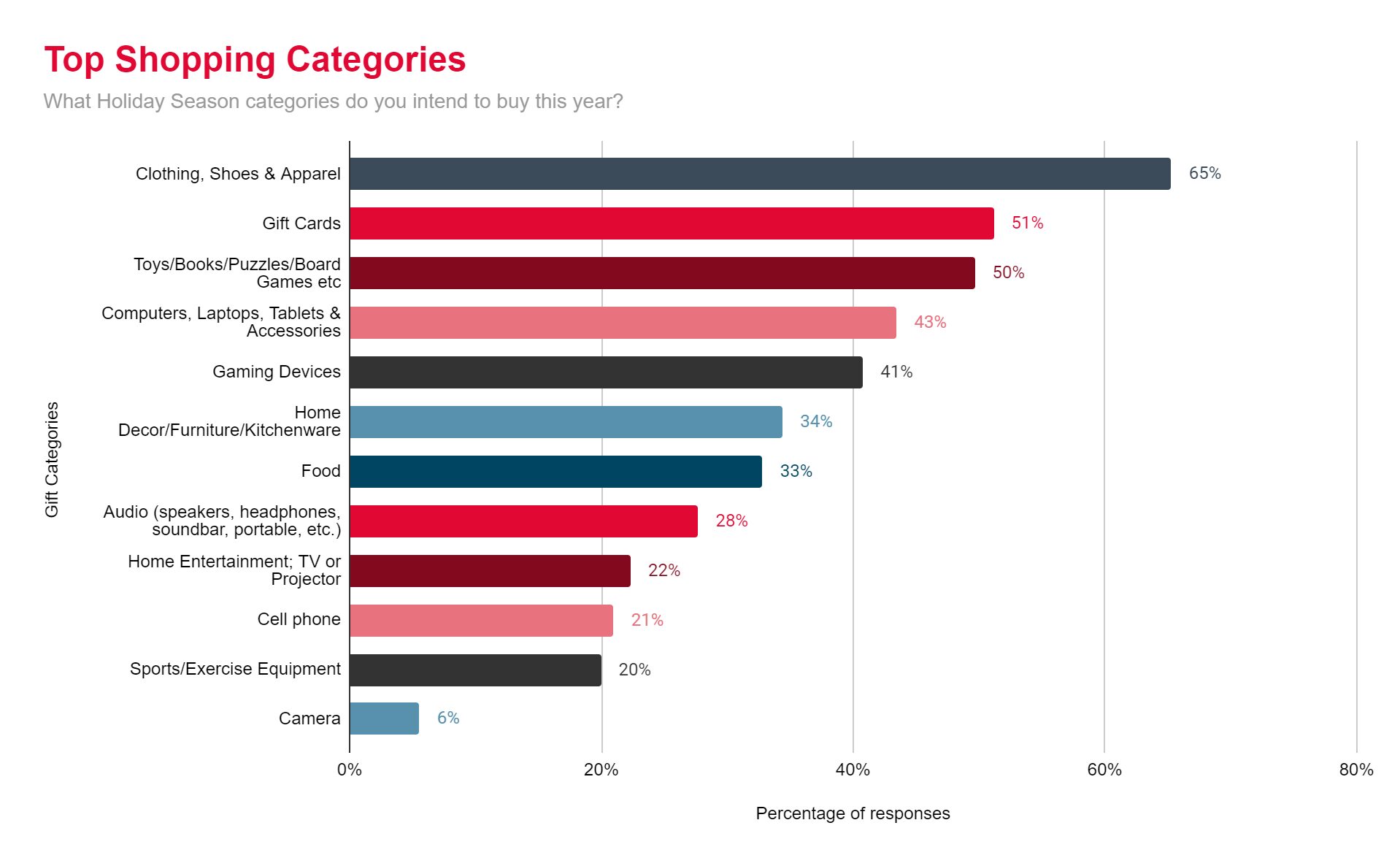 Gift Cards come second to clothing with 51% of respondents intending to purchase gift cards this year. Toys/Books/Puzzles/Board Games, etc is another popular category amongst gift givers with 50% planning to purchase these items.

Tech items – consisting of Computers, Laptops, Tablets and Accessories, Gaming Devices and Accessories, Audio, Home Entertainment, Cell Phone, and Camera – make up a majority of the shopping categories this year.

Within the technology categories, Computers, Laptops, Tablets and Accessories is the most popular category amongst shoppers with 43% of consumers intending to purchase these items, followed by Gaming Devices and Accessories with 41%. The least popular tech items to purchase are Home Entertainment (22%), Cell Phones (21%), and Cameras (6%).

In early November, about 3 months after the initial survey in September, we asked respondents some follow up questions to learn if their spending plans for the holidays have changed.

43% of respondents indicated that they will be spending less this holiday season than they originally intended.

The cost of living crisis, economic instability, and inflation are the major driving factors pushing consumers to cut back spending.

This was evident in the responses of respondents because when asked why they would be spending less: 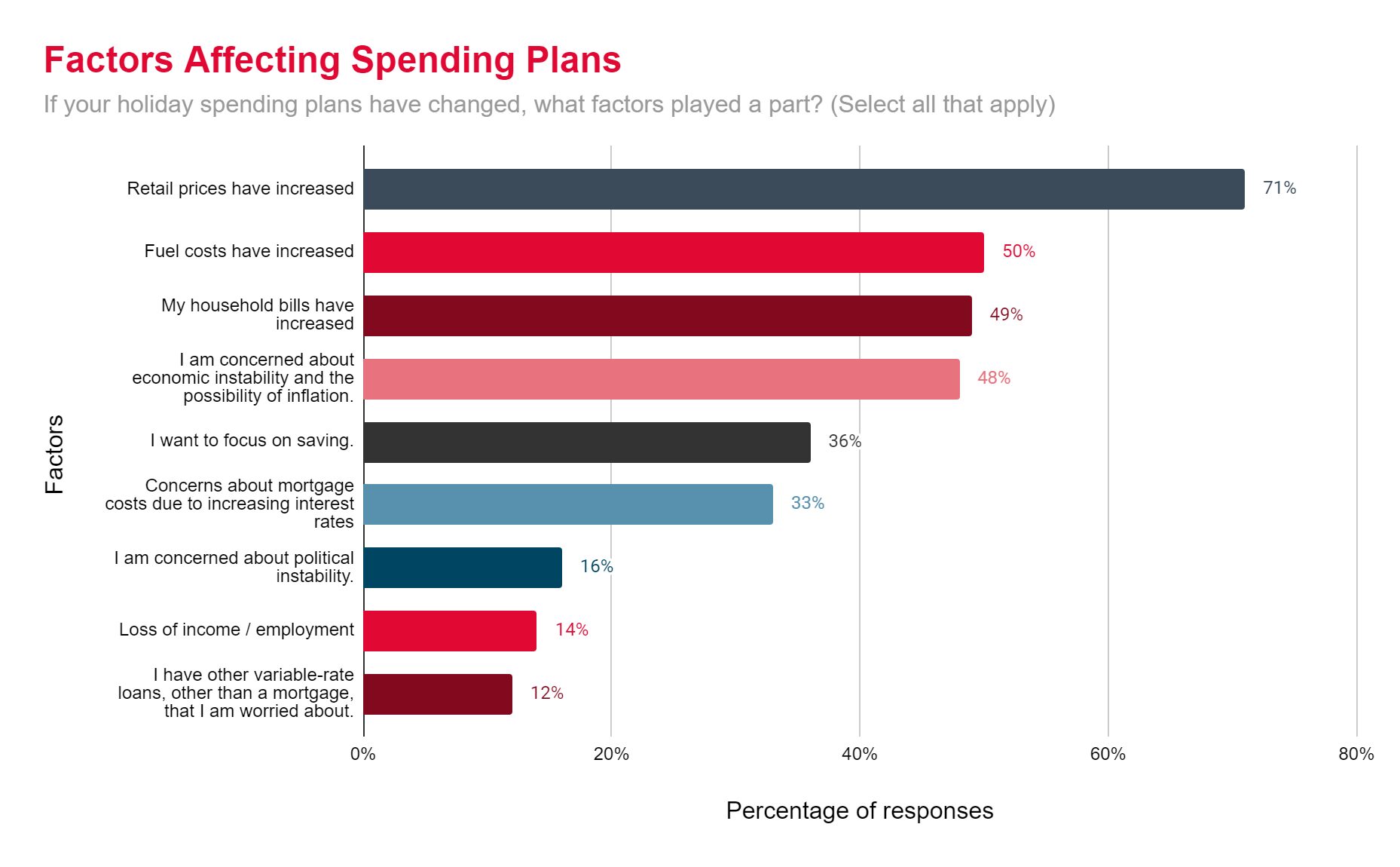 As interest rates continue to increase, in the effort to fight inflation, those with variable interest rate loans are being hit the hardest, which is also a factor impeding holiday shopping. That’s because 33% said they would be spending less due to increasing rates on their mortgages while 12% are concerned about other variable rate loans they have.

Additionally, 14% of people stated they are spending less due to a loss of income or employment. Indicating that the economic situation with many companies under going layoffs is also a factor. It’s also possible that the potential for lay offs could curtail some spending as well.

Another strong factor was simply a focus on saving, with 36% of respondents stating they were cutting back to save up.

Lastly, 16% of respondents cited concerns about political instability as the reason they are planning to spend less this holiday season. 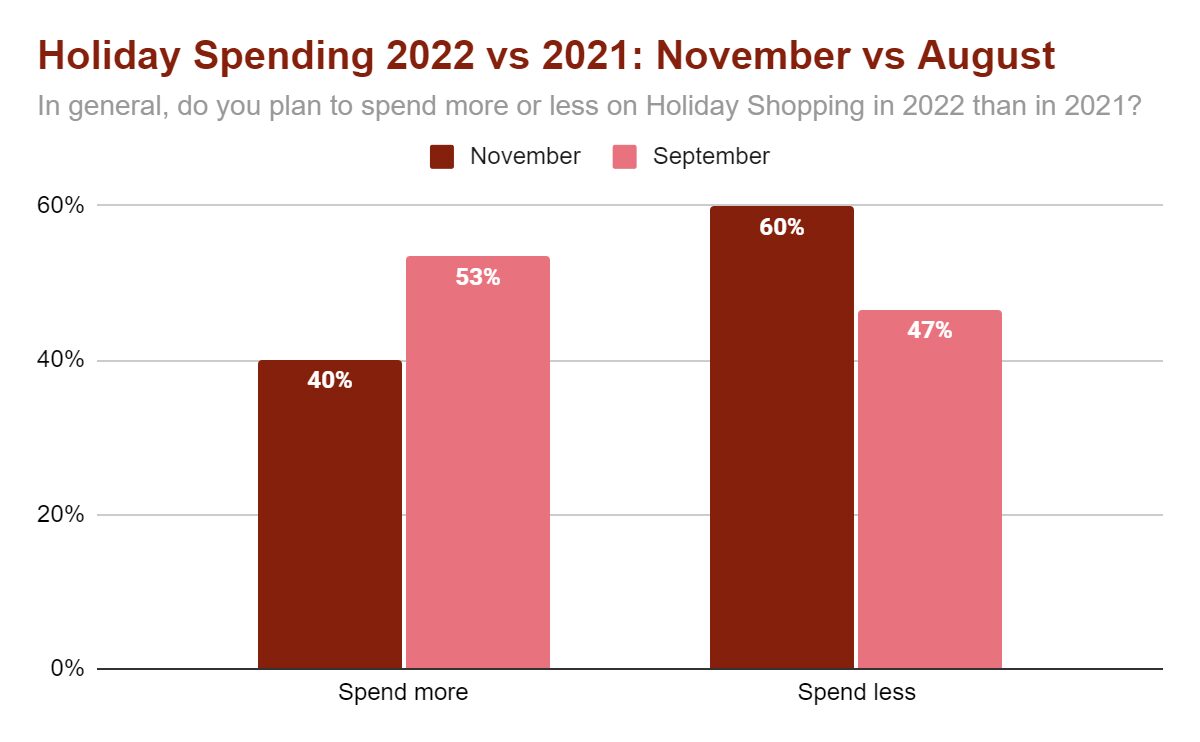 Consumer budgets for the holiday season are decreasing, with 75% of consumers are planning to spend $1000 or less this holiday season.

The number of people who are looking to spend only $500 has increased 24% since September, as people tighten their wallets. 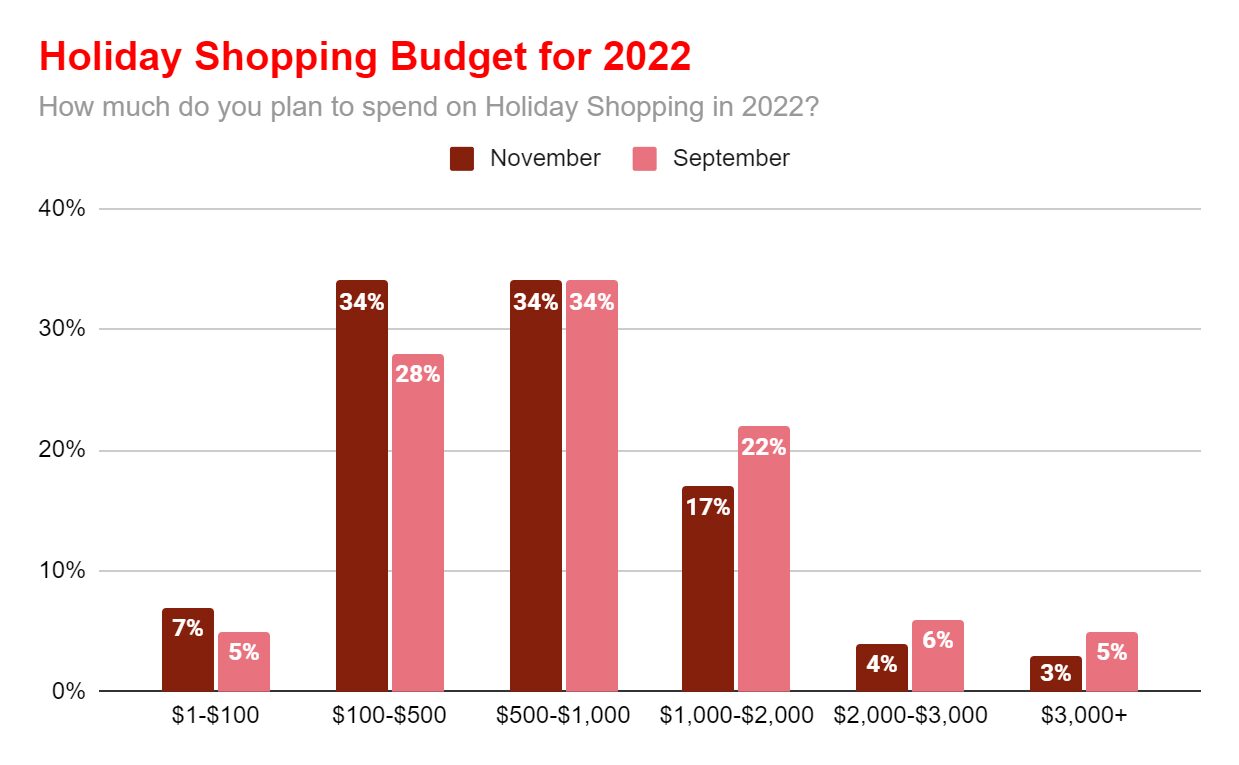 When looking at just the higher end of spending, the number of people who plan to spend above $2000 has decreased even more - down 36% since September.

When will people do their holiday shopping 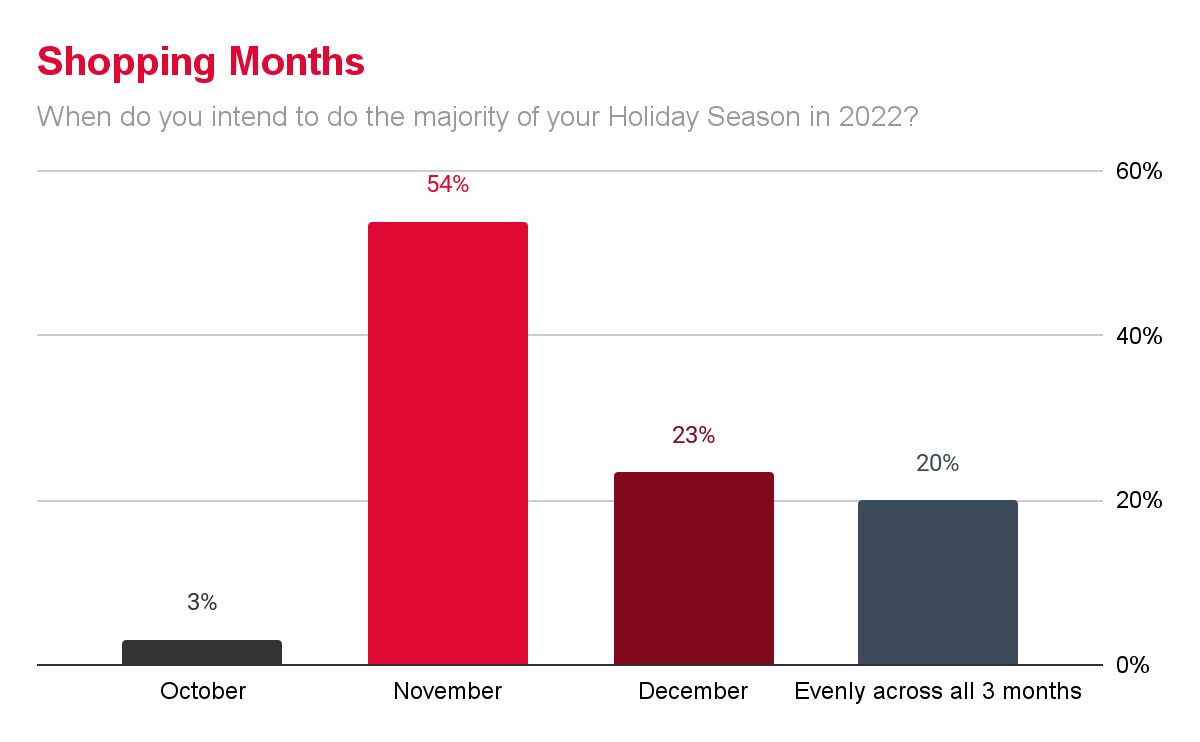 Therefore, 43% of consumers will still be doing their shopping in December of respondents.

How many people plan to shop on Black Friday / Cyber Monday?

91% of consumers will be purchasing holiday gifts during Black Friday and Cyber Monday sales events. 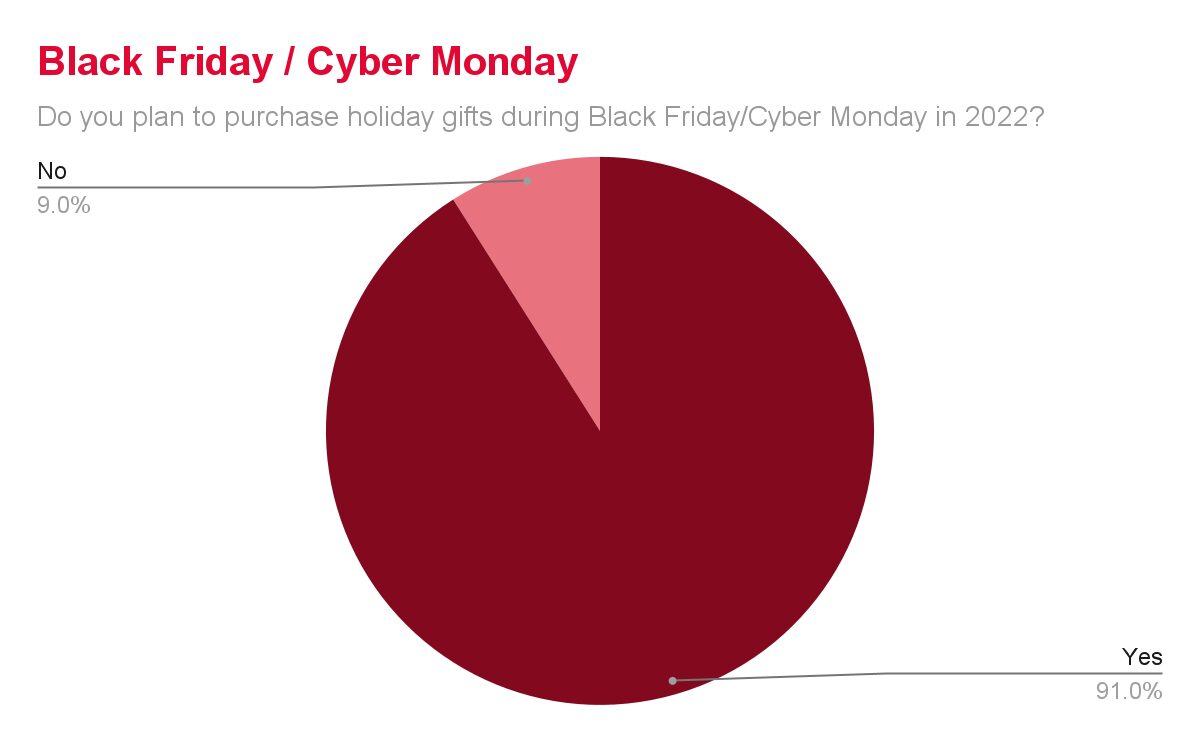 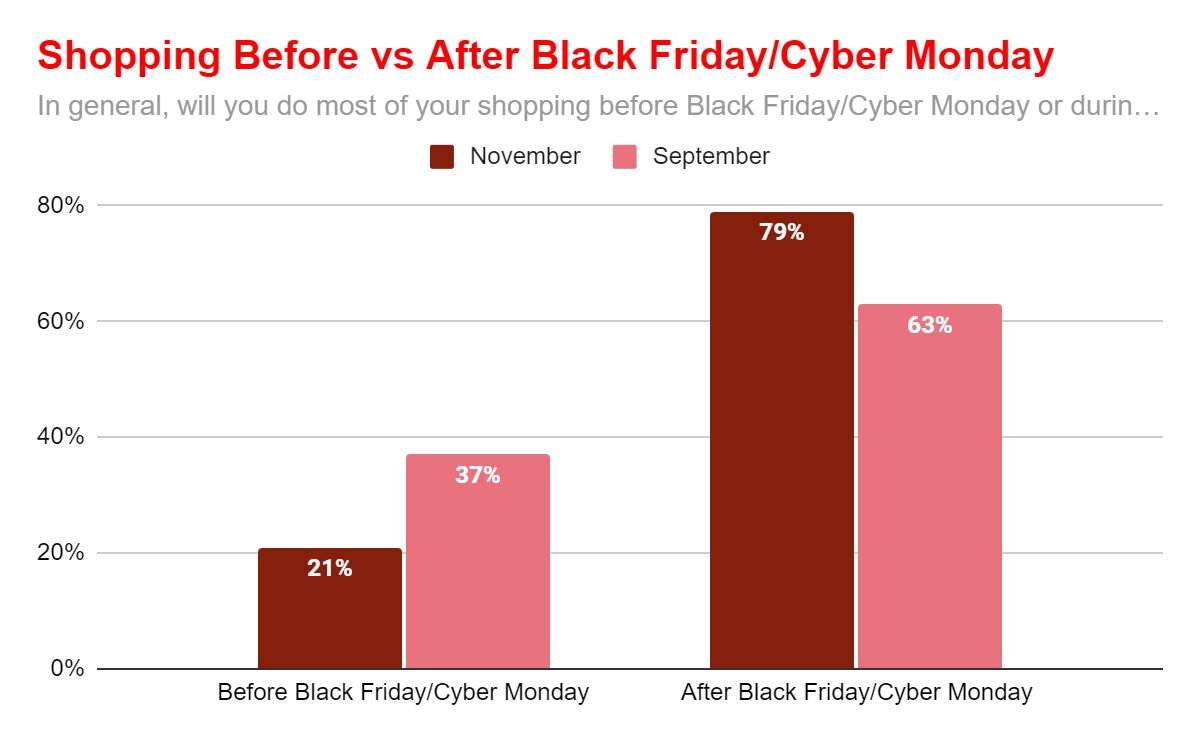 More than a third of consumers had planned to finish a majority of their shopping before BF/CM, but as time has gone on, it seems their shopping goals have been pushed back.

Now just a fifth of believe they will be done before the major shopping holidays.

60% of consumers are planning to only spend $500 or less this Black Friday and Cyber Monday, nearly 20% more since our September survey. 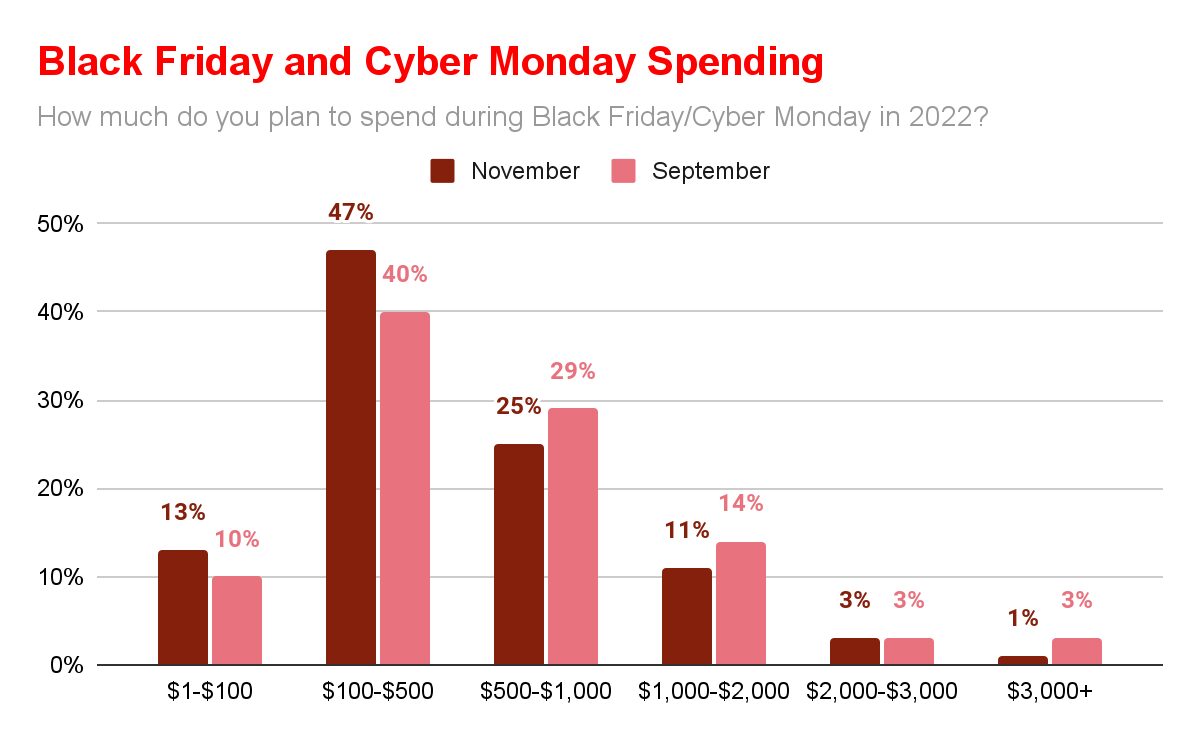 Only 40% of consumers have budgeted more than $500 for their Black Friday and Cyber Monday shopping, 18% fewer than what we found in September. Specifically, the number of shoppers looking to spend:

Months after the initial survey, more than half of the respondents indicated that their spending plans have changed with a majority of holiday shoppers intending to spend less. Signs are pointing towards the 2022 holiday shopping season potentially being significantly worse than 2021.

With every passing month and worsening economic signs, it seems consumers are becoming more cautious and conscious of their spending plans.

The primary drivers of this decreased spending revolve around the rising cost of living, rising prices, inflation, reduced income, and loss of jobs. The concerns from which continue to grow as the economic crisis continues to unfold.

Still, the vast majority are planning to continue with holiday shopping overall, with a major focus for online shopping. Significant amounts of people are looking to shop early, take advantage of deals, and get what they can on BF/CM to fit their holiday shopping into their budgets.