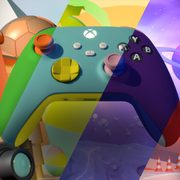 Craft a one-of-a-kind controller for your gaming sessions from Microsoft, where their Xbox Design Lab is back with custom Xbox controllers!

The Xbox Design Lab is a workshop where you can customize your own Xbox Wireless Controller. The service was shut down in September 2020 and re-launched on June 17 to feature the re-designed Xbox Series X|S Controller.

Nearly every surface on the controller can be customized in one of 18 colours, including the front body, back, bumper, triggers, D-pad, thumbsticks and ABXY buttons, resulting in millions of possible colour combinations.

Design Lab custom controllers are priced at $84.99 in Canada ($99.98 if you add an engraving), which is a $10.00 premium over the standard Xbox Wireless Controller. However, the service is popular for gamers who want a unique controller instead of the generic colour options.

All Design Lab controllers qualify for free shipping and are functionally identical to the standard Xbox Wireless Controller, which is compatible with Xbox Series X|S, Xbox One, Windows 10, Android and iOS devices.