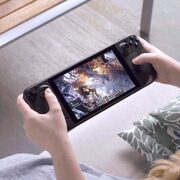 Take your Steam library anywhere you go with the latest device from Valve, because the Steam Deck is now available to order – no reservation required.

In Canada, the Steam Deck is only available through Steam and we've listed the Canadian pricing for each configuration, along with the newly-released Steam Deck Dock.

Steam Deck orders have been fulfilled very slowly ever since its February 2022 launch, but Valve is ramping up production ahead of the holiday season, with an approximate shipping time of 2-3 weeks instead of several months.

Originally unveiled in July 2021, the Steam Deck is a handheld gaming device with a 7" touchscreen, AMD Zen 2-based APU, 16GB of RAM and built-in controls. The device has received mostly positive reviews, with praise for its competitive price, performance and user-friendly approach to repairability. On the other hand, most criticism has been directed at the Steam Deck's underwhelming battery life and occasional software glitches.

The Steam Deck qualifies for free shipping in Canada and there's a limit of one Steam Deck per Steam account.