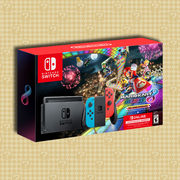 Black Friday is one of the best times to buy a Nintendo Switch in Canada, as Nintendo has released a special Black Friday bundle every year since its launch in 2017.

Here's where you can buy the Nintendo Switch Mario Kart 8 Deluxe Black Friday Bundle in Canada – stock will be available from all retailers starting Sunday, November 21 (exact launch times will vary by retailer).

Stock has historically sold out very quickly and the bundle will likely be available at other stores including London Drugs and Shoppers Drug Mart, but these stores have not confirmed availability (we'll update the list as they become available).

While the bundle does not include the new Nintendo Switch (OLED Model), the $379.99 bundle price is a good deal overall, as the price is $20.00 less than last year and identical to a standalone console, but adds an extra $89.00 in value