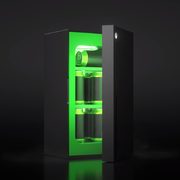 Xbox and chill takes on a new meaning at Microsoft, where the highly-anticipated Xbox Series X Mini Fridge is back in stock.

In Canada, pre-orders were launched on December 15 exclusively through the Microsoft Store, with initial stock selling out within a matter of minutes. For reference, the fridge is highly sought-after by gaming fans, mostly due to the immense popularity of the Xbox fridge meme in the gaming community.

The Xbox Series X Mini Fridge is available online only while supplies last and the Microsoft Store offers free shipping on all orders with no minimum.