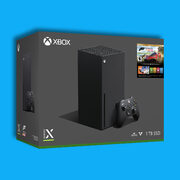 Game throughout 2023 with a new Xbox from Microsoft, where the Xbox Series X Forza Horizon 5 Bundle is now available in Canada.

The Xbox Series X is Microsoft's flagship gaming console, with a built-in Blu-ray drive and capable of playing next-gen games at up to 4K. While Xbox Series X re-stocks were more frequent in 2022, stock has dwindled in recent months and the standalone console has been more difficult to find in late-2022.