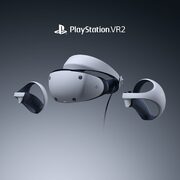 Step into a new reality at Best Buy, where the PlayStation VR2 is now available to pre-order in Canada.

Originally unveiled in February 2022, the PlayStation VR2 is the next-generation virtual reality headset from PlayStation and their successor to the PlayStation VR. PS VR2 was designed for the PlayStation 5 and features several high-performance improvements including OLED lenses, headset feedback, eye tracking, 3D audio and adaptive triggers on the Sense controllers.

Over 20 compatible games will be available at launch, including Horizon Call of the Mountain and Star Wars: Tales from the Galaxy's Edge, along with VR favourites like Beat Saber and Resident Evil Village.

Pre-orders are scheduled to ship on February 22 and all PlayStation VR2 listings qualify for free shipping from Best Buy.

Level up your controller at Best Buy, where the new PlayStation 5 DualSense Edge Wireless Controller is now available to pre-order in Canada.

Originally unveiled on August 23, the DualSense Edge is a new high-performance wireless controller designed by Sony for the PS5, with premium features including re-mappable controls, multiple profiles and interchangeable stick caps. The DualSense Edge retains the same shape as the standard DualSense controller and comes with six stick caps and four back buttons to customize the feel of the controller, along with a braided USB-C cable and carrying case.

For reference, the $269.99 price is much higher than the generic DualSense Wireless Controller, as Sony is positioning the DualSense Edge as a direct competitor to Microsoft's Xbox Elite Series 2 Wireless Controller. In addition, pre-orders are available from other retailers like Amazon.ca and GameStop, but Best Buy has the better track record for Day One deliveries.

Pre-orders are scheduled to ship on January 26, 2023 and the PlayStation 5 DualSense Edge Wireless Controller qualifies for free shipping from Best Buy.