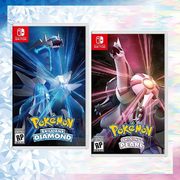 Visit the Sinnoh region this November with the latest Pokémon games from Best Buy, where Pokémon Brilliant Diamond and Shining Pearl are available to pre-order now!

Originally announced on May 26, Pokémon Brilliant Diamond and Shining Pearl are Nintendo Switch remakes of Pokémon Diamond and Pearl, which were originally released in 2006 on Nintendo DS. The remakes feature the same general story of the original games, but with improved graphics and updated environments throughout the game to bring the titles up to modern Nintendo Switch standards.

A new open-world RPG prequel, Pokémon Legends: Arceus, was also announced alongside the titles and can also be pre-ordered at Best Buy for $79.99.