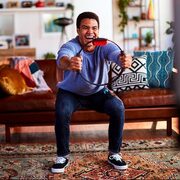 End your summer with some new games from Amazon.ca, where you'll save up to $25.00 on select exclusives for Nintendo Switch, including rarely-discounted hits like Ring Fit Adventure.

There are four games currently on sale and we've listed each title below.

For reference, Big Brain Academy and Game Builder Garage are priced at new historical lows, while Ring Fit Adventure and Super Mario Maker 2 are priced at their second-lowest prices dating back to 2020.

These video game deals are effective online until September 28. Amazon.ca offers free shipping for all Prime members or on orders over $35.00 for those who aren't members.

Three Nintendo Switch Lite colours are available for $225.00, which marks a new all-time low price for the handheld console – for reference, Nintendo Switch Lite deals are very rare and the last time the console was discounted was back March 2021 when it was $25.00 off. Meanwhile, the Switch Lite is still regular price at other Canadian retailers including Best Buy, GameStop and The Source.

This offer is effective online for a limited time and all three colours qualify for free shipping from Amazon.ca.

Blend in anywhere with the latest PS5 accessories from Amazon.ca, where the PlayStation 5 Gray Camouflage Collection is now available to pre-order in Canada.

Originally unveiled on September 6, the Gray Camouflage Collection is a new line of PlayStation 5 accessories with a modern camouflage pattern – the camo pattern is unique on each device and subtly includes PlayStation's iconic shapes as an extra Easter egg.

For reference, the pricing is in-line with PlayStation's Galaxy Collection colourways and release dates will vary by product – the DualSense Controller and Console Cover will release on October 14, while the PULSE 3D Headset will release in December.

The PlayStation 5 Gray Camouflage Collection is available online and all three products qualify for free shipping from Amazon.ca.

Posted July 6: Xbox Series X Consoles Are Back In Stock

Jump on the next-gen bandwagon at Amazon.ca, where standalone Xbox Series X consoles are back in stock.

Limited quantities are available and Xbox Series X consoles have been easier to find in 2022, but most retailers (including GameStop and Walmart) still require an additional purchase to complete a bundle instead of offering just the standalone console at retail price.