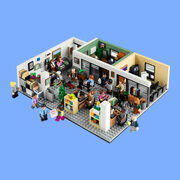 Walmart Walmart: Get the LEGO Ideas The Office in Canada Get LEGO's The Office Set at Walmart!

Okay, it's happening. Everybody stay calm.

Bring home Scranton's most iconic paper company from Walmart, where the LEGO Ideas The Office is back in stock.

Walmart and LEGO are the exclusive Canadian retailers for this highly-anticipated set and pre-orders from both retailers sold out in late-July, but limited stock is available to order at Walmart (LEGO remains sold out).

Plus, several accessories are included to reference memorable moments from the show, including Michael's golden ticket, a pot of Kevin's famous chili (the trick is to undercook the onions), the script for Threat Level Midnight, a pretzel for Stanley, a fax from "Future Dwight" and much more.

The LEGO Ideas The Office set is scheduled to ship from Walmart in November and qualifies for free shipping.