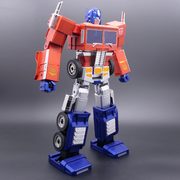 Own the robot childhood-you always wanted from Robosen, where their Transformers Optimus Prime Auto-Converting Robot is now available to pre-order in Canada for $799.00 USD.

Originally unveiled on April 9, this Optimus Prime robot is made in collaboration with Hasbro and constructed with over 5000 individual parts, 60 microchips and 27 servo motors -- the end result is a robot that can transform automatically from a truck into a 19" tall Optimus Prime, iconic leader of the Autobots.

Optimus can also respond to your voice commands and features 80 unique sound effects, including genuine transforming sounds and dialogue from Peter Cullen, the long-time voice actor for Optimus Prime in movies and TV.

When the robot was first announced, pre-orders were not open to Canada, but Robosen is now accepting pre-orders for those in Alberta, British Columbia, Manitoba, Ontario, Quebec and Saskatchewan -- a $100.00 USD deposit is required immediately, while the remainder will be billed when Optimus ships.

The Transformers Optimus Prime Auto-Converting Robot is scheduled for release in November 2021 and a limit quantity will be manufactured, so get your collectible Optimus Prime before they're sold out.