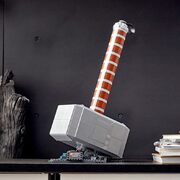 Become worthy to wield Mjölnir at LEGO, where the new LEGO Marvel Thor's Hammer has officially launched in Canada.

Scheduled unveiled on February 1, the LEGO Marvel Thor's Hammer is the newest set from LEGO's Infinity Saga Collection, inspired by milestone moments from the Marvel Cinematic Universe. This 979-piece set is a brick-built replica of Mjölnir – the mythical Asgardian hammer wielded by Thor (and Captain America) in several MCU films.

Thor's Hammer measures in at approximately 46cm in length and comes with a stand to display it upright at an angle, similar to its first MCU appearance in Iron Man 2. The head of Mjölnir also features a secret compartment to store four included extras – a Thor minifigure (with a miniature Mjölnir), Odin's fake Infinity Gauntlet, the Tesseract and Asgard's Eternal Flame.

The LEGO Marvel Thor's Hammer is available online and qualifies for free shipping. As of March 1, the LEGO Shop and Toys R Us are the only Canadian retailers with the set listed online, but we'll add other buying options as they become available.