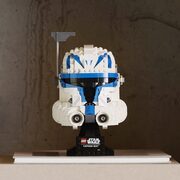 Join the Grand Army of the Republic with the latest from LEGO, where the new LEGO Star Wars Captain Rex and Commander Cody Helmets are now available to pre-order in Canada.

Originally unveiled on January 26, Captain Rex and Commander Cody are the newest additions to LEGO's popular helmet collection to commemorate the 20th anniversary of the Clone Wars. While seldom seen in live-action Star Wars movies, both characters have become fan-favourites and are featured prominently in several animated series including Star Wars: The Clone Wars, Star Wars Rebels and Star Wars: The Bad Batch.

Both sets are scheduled to ship on March 1 and qualify for free shipping from the LEGO Shop.