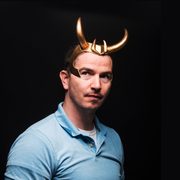 Become the God of Mischief with the latest collectible merch from EB Games, where the new Marvel Studios' Loki Replica Helmet Collectors Set is now available to pre-order for $129.99 in Canada!

NOTE: the official product name on the EB Games website includes a spoiler of the main villain's real identity, which was revealed in the third episode of the Disney+ series. Click at your own risk.

Originally unveiled on June 21, the Loki Replica Helmet Set is a limited-edition set of tie-in merchandise for the Disney+ series Loki. The set includes two replica Loki crowns – one worn by Tom Hiddleston's Loki and one worn by Sophia Di Martino's character in the series.

Both crowns feature a brushed brass finish and can be worn while hunting fugitives through time or displayed in its stylized box. The limited-edition set comes with a certificate of authenticity and is available in Canada exclusively at EB Games, with a total of 6000 sets produced worldwide.

For the uninitiated, Marvel Studios' Loki is the newest MCU series on Disney+, which sees Loki reluctantly help the Time Variance Authority protect the primary timeline from an elusive time-travelling fugitive – sign up for Disney+ to stream every episode starting at just $11.99 per month.

The Marvel Studios' Loki Replica Helmet Set is scheduled for release on August 18 and qualifies for free shipping from EB Games.