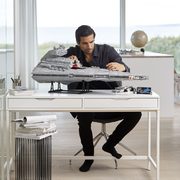 Add one of the most impressive LEGO sets to your collection from Costco.ca, where you can get the LEGO Star Wars Imperial Star Destroyer for $849.00 and get a bonus LEGO Harry Potter Hogwarts Great Hall set for free -- a value of $114.99!

Originally released in September 2019 as part of LEGO's Ultimate Collector Series, the 4784-piece LEGO Imperial Star Destroyer is inspired by Darth Vader's Devastator I-class Star Destroyer, as seen in Star Wars: A New Hope. The set is notable for being one the largest LEGO sets ever released, measuring in at 110cm in length, 66cm wide and 44cm tall. Other set features include:

This offer is available online for a limited time. A Costco membership is required to shop online and shipping is included in the online price.