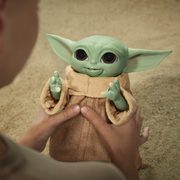 Originally unveiled on March 23, the Star Wars Galactic Snackin' Grogu is Hasbro's latest interactive figure of Grogu (also known as The Child, more affectionately known as Baby Yoda), inspired by his frequent snacking in Season 2 of The Mandalorian.

The animatronic figure stands 9.25" tall and comes with four Grogu-approved accessories including a bowl with tentacles, a macaron, a spoon and the Razor Crest's shifter knob. Grogu will react with different movements and sounds when presented with each of the accessories. Other features include:

For the uninitiated, Grogu is a character from The Mandalorian on Disney+ who has become a Star Wars fan-favourite and worldwide phenomenon thanks to his adorable appearance in the series -- sign-up for Disney+ to stream the entire first and second seasons now.

The Star Wars Galactic Snackin' Grogu is scheduled for release on October 1 and qualifies for free shipping from Amazon.ca.