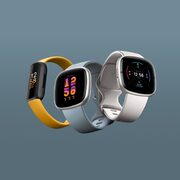 Track your steps, workouts and naps with the latest from Fitbit, where the just-announced Fitbit Inspire 3, Sense 2 and Versa 4 are now available to pre-order in Canada.

Plus, you'll get a free 24mm Infinity or Sport Band with Fitbit Sense 2 or Versa 4 pre-orders – a value of up to $39.95. Simply add any Infinity Band or Sport Band to your cart with your pre-order and the band will be included for free at checkout.

Originally unveiled on August 24, the Inspire 3, Sense 2 and Versa 4 are the latest-generation wearable devices from Fitbit. The entry-level Inspire 3 adds a new colour OLED display and blood oxygen (SpO2) sensor to its slim design, while the higher-end Sense 2 and Versa 4 come with thinner profiles and improved tracking sensors. Like the previous-generation, the Sense 2 comes with a few extra features not found in the Versa 4, including an ECG monitor, skin temperature sensor and stress management notifications.