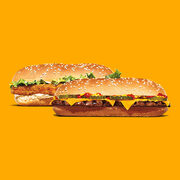 2023 is already extra long at Burger King, where you can get two Extra Long Cheeseburgers or Original Chicken Sandwiches for just $5.00.

NOTE: pricing is higher in Maritime provinces, as the same deal is $7.00 in New Brunswick, Nova Scotia and Prince Edward Island; and $8.00 in Newfoundland.

From January 2-22, simply order two Extra Long Cheeseburgers or Original Chicken Sandwiches (you can mix and match) in-restaurant or through the Burger King Canada app (Android, iOS) to get the 2/$5.00 price.

For reference, both the Extra Long Cheeseburger and Original Chicken Sandwich are regularly $5.99 in Toronto (pricing may vary by region), which means you'll save $6.98 by ordering two sandwiches instead of one.

This deal is effective until at Burger King restaurants in Canada until January 22 – click here to find the BK location nearest you.