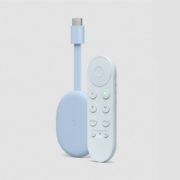 Binge your favourite shows with the newest streaming device from Google, because you can get the new fourth-generation Chromecast with six months of Netflix for $119.99!

After purchase, simply set up the Chromecast and follow the on-screen instructions to redeem six months of Netflix -- the offer is only redeemable with the Standard Netflix Streaming Plan, which regularly costs $13.99 per month.

Originally unveiled on September 30, the fourth-generation Google Chromecast is a media streaming device with built-in Google TV that lets you stream content from popular sources including Netflix, Disney+, Amazon Prime Video and more at up to 4K HDR resolution. The device also retains the cast feature from previous generation Chromecasts, which lets you mirror content from a Chrome browser or compatible device to your TV.

This offer is available online until December 31, 2021 and all Netflix offers must be redeemed by March 1, 2022.