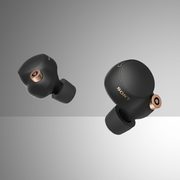 Treat your ears to the sounds of silence from Amazon.ca, where the just-announced Sony WF-1000XM4 Noise Cancelling Truly Wireless Earbuds are available to pre-order now for $399.99 in Canada!

Originally unveiled on June 8, Sony's WF-1000XM4 earbuds are the follow-up to the WF-1000XM3 earbuds from 2019, but with several improvements including a sleeker design, improved battery life and better noise cancellation over the previous-generation. In early reviews, the WF-1000XM4's have received praise for their outstanding battery life and noise cancellation, with The Verge noting that they outperform premium competitors including Apple's AirPods Pro and Bose's QuietComfort Earbuds. A few other features include:

Sony WF-1000XM4 Noise Cancelling Truly Wireless Earbuds are scheduled for release on July 2 and both colours qualify for free shipping from Amazon.ca.