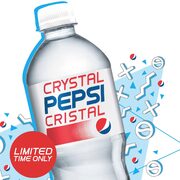 Party like its 1992 with Pepsi, because they're celebrating the 30th anniversary of Crystal Pepsi by re-releasing the clear soda in Canada this summer.

In Canada, Crystal Pepsi will be available in 591mL bottles at most major grocery stores like Loblaws, Metro, Real Canadian Superstore, Shoppers Drug Mart, Sobeys and Walmart, along with smaller outlets like gas stations and convenience stores.

As of June 28, soda fans have already spotted Crystal Pepsi in-store at Loblaws and Sobeys, but it may take a few weeks to trickle into your local store depending on your location – we suggest checking grab-and-go coolers near checkout lanes instead of the soda aisle, since Crystal Pepsi will only be sold in 591mL bottles.

Crystal Pepsi is best known for its unique colour (or lack thereof), while the taste is similar to regular Pepsi, but with less acidity due to the absence of artificial colouring.

Crystal Pepsi is available in Canada for a limited time wherever Pepsi beverages are sold (availability may vary by store). Happy hunting!