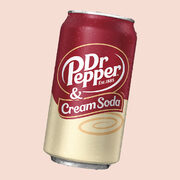 The soda mash-up you never knew you wanted is officially coming to Canada, as the limited-edition Dr. Pepper & Cream Soda will be available in Canadian grocery stores this summer.

Originally launched in 2020, Dr. Pepper & Cream Soda is a soft drink that combines original Dr. Pepper with the rich flavour of cream soda, creating an irresistible and refreshing symphony of deliciousness. The flavour was released exclusively in the United States and quickly developed a cult-like following, leading to its permanent addition to the American Dr. Pepper lineup.

In Canada, Dr. Pepper & Cream Soda will be available starting mid-2022 at grocery stores across the country in 355mL cans and 591mL bottles. As of late-April, some soda fans have already spotted the flavour at Rexall and Shoppers Drug Mart, while @DrPepperCanada on Twitter suggests checking smaller convenience stores if you want to taste the hype early.

Otherwise, expect to see the limited-edition flavour trickle into major grocery retailers like Amazon.ca, Loblaws, Real Canadian Superstore, Sobeys, Walmart and others starting in May.

Unlike the American version, Dr. Pepper & Cream Soda will only be a limited-edition flavour in Canada – according to the Dr. Pepper Canada website, "The FOMO is real. Only for a limited time. When it's gone, it's gone."

Dr. Pepper & Cream Soda is available in Canada for a limited time wherever Pepsi beverages are sold (availability may vary by store). Happy hunting!