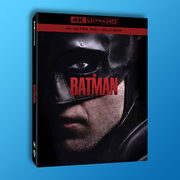 Bring home vengeance from Amazon.ca, where The Batman is now available to pre-order in Canada, with an official release date of May 24.

Originally released in theatres on March 4, The Batman is the latest movie in the Batman film franchise, set during Batman's second year of crime-fighting. In the movie, Batman investigates The Riddler – a serial killer who leaves riddles at the scenes of his crimes to taunt police. Working alongside Jim Gordon, Batman must use his detective skills to unravel the mystery behind The Riddler before he can eliminate his next target – Bruce Wayne.

The Batman has received excellent reviews, with praise for its tone, storytelling and emphasis on Batman's detective abilities. Robert Pattinson stars as Bruce Wayne/Batman and is joined by Paul Dano as The Riddler, Jeffrey Wright as Jim Gordon, Zoë Kravitz as Selina Kyle and Colin Farrell as Oswald Cobblepot.

Pre-orders will ship starting May 24 and qualify for Amazon's Pre-Order Price Guarantee, which ensures that you'll be charged the lowest listed price between now and the official release date. Amazon.ca offers free shipping for all Prime members or on orders over $35.00 for those who aren't members.

While these items were in stock at the listed prices at the time this deal was posted, Amazon practices dynamic product replacement – once their stock of an item is depleted, it may be replaced with the same item sold by a third-party retailer for a different price. Double-check that the listed price and shipping fees we posted are still available before you buy.