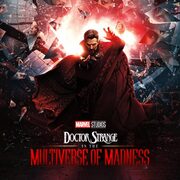 Get ready to explore the multiverse this May, because advance tickets to Doctor Strange in the Multiverse of Madness are now available in Canada.

Scheduled to premiere on May 6, Doctor Strange in the Multiverse of Madness is the long-awaited sequel to Doctor Strange (2016) and the newest chapter in the Marvel Cinematic Universe. After nearly destroying the Earth-199999 (MCU) timeline in Spider-Man: No Way Home, Dr. Stephen Strange sets out to learn more about the multiverse in order to protect his reality, recruiting Wanda Maximoff and newcomer America Chavez for his multiversal journey.

Movie formats and ticket pricing will vary by theatre and region – simply choose your preferred theatre and you'll see all formats available for Doctor Strange in the Multiverse of Madness at your theatre.

Advance tickets are available online starting April 6 until May 5, but we suggest booking as soon as possible if you want to guarantee a seat during its opening week.