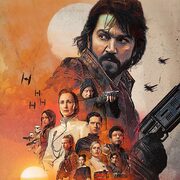 The rebellion begins now on Disney+, where Star Wars: Andor is now available to stream in Canada.

Andor is a new series set five years before the events of Rogue One, following Cassian Andor and his journey from no-name thief to rebel spy during the early years of the Rebel Alliance. Diego Luna reprises his role of Cassian Andor and is joined by several familiar faces including Genevieve O'Reilly as Mon Mothma and Forest Whitaker as Saw Gerrera.

The series will consist of 12 episodes and debut with a three-episode premiere on September 21, followed by nine new episodes every Wednesday from September 28 to November 23.

Star Wars: Andor is available to stream for all Disney+ subscribers – sign up for Disney+ to start streaming, starting at just $11.99 per month.

The newest MCU hero has landed at Disney+, where She-Hulk: Attorney at Law is now available to stream in Canada.

Originally released on August 18, She-Hulk: Attorney at Law is a new miniseries set in the Marvel Cinematic Universe following Jennifer Walters, the cousin of Bruce Banner who gains the ability to transform into a green, superpowered 6-foot-7-inch hulk after an accident.

The series will consist of nine episodes and depict Walters' struggles balancing her legal career, personal life and newfound abilities. In addition, several cameos are slated to appear throughout the series, including Bruce Banner/Hulk, Wong, Emil Blonsky/Abomination and perhaps most notably – Matt Murdock/Daredevil.

She-Hulk: Attorney at Law is available to stream for all Disney+ subscribers, with new episodes every Thursday until October 13 – sign up for Disney+ to start streaming, starting at just $11.99 per month.