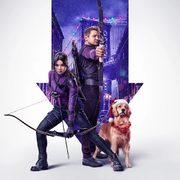 Celebrate the holidays with Clint Barton in New York City, because all episodes of Marvel Studios' Hawkeye are now streaming exclusively on Disney+.

Hawkeye is the latest Disney+ series set in the Marvel Cinematic Universe, taking place approximately two years after the events of Avengers: Endgame.

Now retired from the Avengers life, Barton meets Kate Bishop – a skilled archer and self-proclaimed Hawkeye superfan. Barton reluctantly takes on Bishop as a protégée in order to keep her safe from the Tracksuit Mafia, a mysterious criminal organization that clashed with his Ronin alter-ego during the Blip.

Jeremy Renner reprises his role as Clint Barton/Hawkeye, while Hailee Steinfeld makes her MCU debut as Kate Bishop – sign up for Disney+ to stream every episode now, starting at just $11.99 per month.