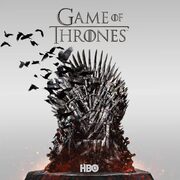 This iTunes collection includes all eight seasons of Game of Thrones in 1080p HD, along with behind-the-scenes featurettes and the documentary Game of Thrones: The Last Watch. For reference, $59.99 is the second-lowest historical price on iTunes (the same collection was $49.99 in 2020), while the Blu-ray set is $152.99 at Amazon.ca.

Originally airing from 2011-2019 on HBO, Game of Thrones is based on "A Song of Ice and Fire" by George R.R. Martin and chronicles the epic power struggle in the fictional kingdoms of Westeros and Essos. The first six seasons have received critical acclaim and are considered must-watch TV, while the final two seasons have received mixed reviews.

This offer is available through Apple iTunes for a limited time. All episodes are digital and available to download or stream on supported devices immediately after purchase.