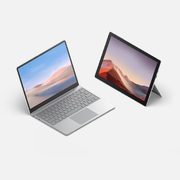 Start your holiday shopping at Microsoft, where you can shop their latest Deals of the Week with savings on select Windows PCs, Surface devices and accessories.

We've listed a handful of featured deals and configurations to give you an idea of what's on sale.

These deals are effective online for a limited time and the Microsoft Store offers free shipping on all orders with no minimum.

Celebrate two decades of Xbox with limited edition gear from Microsoft, where the Xbox 20th Anniversary Special Edition Headset is now available to pre-order in Canada.

Originally unveiled on October 7 alongside the 20th Anniversary Controller, this limited edition headset commemorates the 20th anniversary of Xbox and features a translucent black design with silver internals and green accents to pay homage to the OG Xbox console.

The headset is functionally identical to the standard Xbox Stereo Headset and compatible with Xbox Series X|S, Xbox One and devices with a 3.5mm headphone jack. For reference, the $79.99 price is a $5.00 premium over the generic Xbox Stereo Headset.

The Xbox 20th Anniversary Special Edition Headset is scheduled for release on November 15 and qualifies for free shipping from the Microsoft Store.

Get first dibs on the latest tech from Microsoft, where their new 2021 Surface devices are now available to pre-order in Canada.

Originally unveiled on September 22, there are four new devices available to pre-order and we've listed each one below, along with Canadian pricing and a brief description of each one.

The Surface Go 3, Surface Laptop Studio and Surface Pro 8 will all come with Windows 11 out-of-the-box, while the Surface Duo 2 runs Android 11 with Microsoft Office 365 pre-installed.

All four 2021 Surface devices are scheduled for release in October and qualify for free shipping from the Microsoft Store.