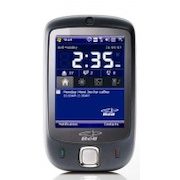 get this deal
this offer is expired
Yesterday, Bell announced the flat-out hottest deal on a data plan in Canada with unlimited mobile Internet browsing and e-mail for only $7 a month! Exact details are still a bit on the light side since the offer was just launched yesterday but it does seem you'll have access to unlimited Internet and e-mail usage.

The catch? It's a small one, but it's only for the new HTC Touch phone. The HTC Touch runs Windows Mobile and is an iPhone competitor with their own TouchFLO interface to give you easy access to all the multimedia capabilities. The HTC touch starts at $149.95 with a 3-year contract according to the press release.

At $7 per month in addition to your regular phone plan, it's a steal for unlimited mobile Internet!