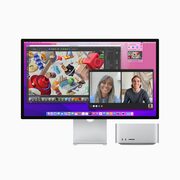 Supercharge your work-from-home routine with the latest from Apple, where the just-announced Mac Studio and Studio Display are now available to pre-order in Canada.

Originally unveiled on March 8, the Mac Studio and Studio Display are Apple's newest hardware products designed for creative professionals. The Mac Studio is an all-new desktop computer, configurable with Apple's latest-generation M1 Ultra Chip, up to 128GB of unified memory and up to 8TB of SSD storage, all in a compact yet powerful form-factor reminiscent of a tall Mac mini.

Pre-orders for the Mac Studio and Studio Display will ship starting March 18, while other hardware announcements from Apple's March 2022 Event – the M1 iPad Air, A15 Bionic iPhone SE and iPhone 13/13 Pro in green – will be available to pre-order this Friday, March 11. The Apple Store offers free shipping on all orders with no minimum.