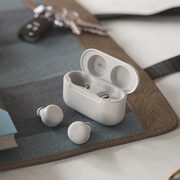 Enjoy your favourite music in peace with the latest from Amazon.ca, where the just-announced Echo Buds Noise Cancelling Wireless Earbuds are now available to pre-order in Canada, starting at $154.99.

Originally unveiled on October 12, Echo Buds are second-generation truly wireless earbuds from Amazon, with features including active noise cancellation, hands-free Alexa support, up to five hours of listening time on a single charge, USB-C and more.

Echo Buds were released in the United States earlier this year and have received positive reviews for their affordable price and sound quality, but the noise cancellation is reportedly not as strong as other premium earbuds like the Apple AirPods Pro or Samsung Galaxy Buds Pro.

Echo Buds are scheduled for release on October 21 and all four configurations qualify for free shipping from Amazon.ca.

Find new tech for the fall at Amazon.ca, where you can save up to 50% on Amazon devices including eero networking, Fire TV streaming sticks, Kindle eReaders and more.

There are over a dozen Amazon devices on sale and we've listed a handful of deals to give you an idea of what's available.

These device deals are effective online for a limited time. Amazon.ca offers free shipping for all Prime members or on orders over $35.00 for those who aren't members.

Originally unveiled on September 21, the 2021 Kindle Paperwhite is the latest-generation Kindle e-reader and successor to the 2018 Kindle Paperwhite, with upgrades including a larger 6.8" display, slimmer bezels, adjustable warm light, USB-C and 8GB of storage. The Kindle Paperwhite Signature Edition ups the storage to 32GB and adds auto-adjusting light sensors and wireless charging compatibility (with a separate charger).

Both models also feature an upgraded interface for faster page turns, up to 10 hours of battery life on a single charge and IPX8 water resistance.

Posted September 10: Up to $30.00 Off Select Fire TV Streaming Devices, Including the 2021 Fire TV Stick

Stay home and stream your favourite shows with new deals from Amazon.ca, where you can save up to $30.00 on select Fire TV streaming devices, including the third-generation Fire TV Stick released in April 2021.

There are three Fire TV devices on sale and we've listed each one below.

These device deals are effective online for a limited time. Amazon.ca offers free shipping for all Prime members or on orders over $35.00 for those who aren't members.

Upgrade your streaming experience with the latest from Amazon.ca, where the all-new Fire TV Stick 4K Max is now available to pre-order for $74.99 with free shipping.

Originally unveiled on September 9, the Fire TV Stick 4K Max is the newest and most powerful streaming stick in the Fire TV family, with a new quad-core 1.8GHz processor, 2GB of RAM, Wi-Fi 6 compatibility and the latest-generation Fire TV Alexa Voice Remote – for reference, performance is approximately 40% faster than the popular Fire TV Stick 4K from 2018, which is regularly $69.99.

The Fire TV Stick 4K Max is functionally identical to other Fire TV devices, with support for several streaming platforms including Crave, Disney+, Netflix, Prime Video, YouTube and more at up to 4K resolution. A few other features include:

The Fire TV Stick 4K Max is scheduled for release on October 7 and qualifies for free shipping from Amazon.ca.