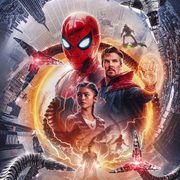 Swing into the multiverse this December, because tickets to Spider-Man: No Way Home are available now at Cineplex.

Scheduled to premiere on December 17, Spider-Man: No Way Home is the next installment of the Marvel Cinematic Universe and one of the most-anticipated movies of the year. After Peter Parker's secret identity is revealed to the world, he visits Doctor Strange and asks the Master of the Mystic Arts to restore his secret with magic. When the spell goes awry, supervillains from across the multiverse are unleashed, forcing Spider-Man to face the Sinister Six for the first time.

Spider-Man: No Way Home tickets are available in several movie formats, including UltraAVX, IMAX and VIP – simply choose your preferred theatre and you'll see all formats available. Availability and pricing will vary depending on your region.

Advance tickets are available online starting November 29 until December 16, but we suggest booking as soon as possible if you want to guarantee a seat during its opening week.

View all comments
get deal