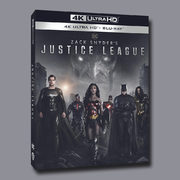 Bring home the real Justice League this fall from Amazon.ca, where Zack Snyder's Justice League (commonly known as The Snyder Cut) is now available to pre-order on Blu-ray, DVD and digital!

Zack Snyder's Justice League is a four-hour director's cut of Justice League, which was originally released in 2017 and received overwhelmingly poor reviews. The Snyder Cut retains the general framework of the original Justice League, but includes previously-scrapped and newly-shot footage in order to build a more cohesive plot and provide a better storytelling experience that stays true to Zack Snyder's original vision. The Snyder Cut has received positive reviews, with most critics and fans in agreement that it is far superior to the 2017 version.

In Canada, Zack Snyder's Justice League was released on March 18 exclusively on Crave and went on to become the most popular movie ever on the service. The movie is not available on any other streaming service in Canada, making this Blu-ray release the only way for those without Crave to watch The Snyder Cut. In addition, 4K Blu-ray is the only way to watch the movie in 4K Ultra HD, as Crave does not support streaming resolutions above 1080p.

Pre-orders will ship starting September 14 and Amazon.ca offers free shipping for all Prime members or on orders over $35.00 for those who aren't members.

While these items were in stock at the listed prices at the time this deal was posted, Amazon practices dynamic product replacement -- once their stock of an item is depleted, it may be replaced with the same item sold by a third-party retailer for a different price. Double-check that the listed price and shipping fees we posted are still available before you buy.