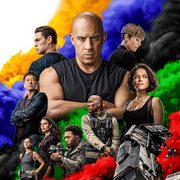 See why nothing is more important than family by bringing home this summer's biggest blockbuster from Amazon.ca, where F9: The Fast Saga is now available to pre-order on Blu-ray and DVD!

Originally released on June 25, F9: The Fast Saga is the latest movie in the Fast & Furious franchise and a sequel to The Fate of the Furious from 2017. In the movie, a now-retired Dominic Toretto re-assembles his crew to take down his estranged younger brother Jakob, who has teamed up with cyber-terrorist Cipher to steal weapons of mass destruction.

The highly-anticipated action flick was delayed several times before its release this summer, earning over $500 million USD at the box office since its premiere. In Canada, the movie is only available to watch in theatres, as Universal Pictures opted for a theatre-only release despite ongoing lockdowns in several regions across the country.

Pre-orders will ship starting November 1 and Amazon.ca offers free shipping for all Prime members or on orders over $35.00 for those who aren't members.

While these items were in stock at the listed prices at the time this deal was posted, Amazon practices dynamic product replacement -- once their stock of an item is depleted, it may be replaced with the same item sold by a third-party retailer for a different price. Double-check that the listed price and shipping fees we posted are still available before you buy.