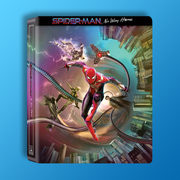 Thwip into the multiverse by swinging to Best Buy, where the limited-edition Spider-Man: No Way Home SteelBook is back in stock.

For reference, the SteelBook Combo is a highly sought-after item for collectors and fans of the movie, as it comes packaged in a metal case with exclusive artwork depicting Spider-Man (Peter One), Doctor Octopus, Green Goblin and Electro. The SteelBook was sold out soon after pre-orders launched on December 23 and this is the first time we've seen it available to order since then.

Originally released in theatres on December 17, Spider-Man: No Way Home is the latest installment of the Marvel Cinematic Universe and one of the most-anticipated movies of 2021. After Peter Parker's secret identity is revealed to the world, he asks Doctor Strange to restore his secret with magic. When the spell goes awry, supervillains from across the multiverse are unleashed, forcing Spider-Man to face the Sinister Six for the first time.