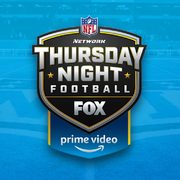 It's football season and NFL Thursday Night Football is back on Prime Video, where you can stream every Thursday night game live starting October 7 in Canada.

11 games will be available to stream on Prime Video for the rest of the 2021-22 NFL regular season, including must-see matchups like the Packers vs. Cardinals on October 28 and Chiefs vs. Chargers on December 16 – we've listed the full Prime Video schedule below, along with links to stream.

All Thursday Night Football streams will start at 7:30 PM ET, while the Christmas Day game will start at 3:40 PM ET. By default, Prime Video simulcasts NFL Network's coverage with Joe Buck and Troy Aikman as commentators, but you also have the option to switch to a Prime Video-exclusive broadcast team of Hannah Storm and Andrea Kremer during all streams.

An Amazon Prime membership is required to stream Prime Video content for free – sign up for a free 30-day trial to stream all five episodes and other award-winning exclusives like Fleabag, The Boys and The Marvelous Mrs. Maisel.