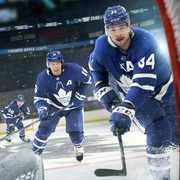 Originally released on October 1, All or Nothing: Toronto Maple Leafs is a five-part documentary series that follows the Toronto Maple Leafs during the 2020-21 season, from training camp up until their first-round playoff exit and everything in between.

This is the first time All or Nothing has documented an NHL team, giving hockey fans a behind-the-scenes look at several major storylines throughout the Maple Leafs season including Auston Matthews' wrist injury, Jack Campbell's emergence as the starting goalie, Nick Foligno's trade and the soul-crushing playoff collapse to the Montreal Canadiens.

An Amazon Prime membership is required to stream Prime Video content – sign up for a free 30-day trial to stream all five episodes and other award-winning exclusives like Fleabag, The Boys and The Marvelous Mrs. Maisel.

All or Nothing: Toronto Maple Leafs is available to all Amazon Prime members starting October 1 – simply log into Prime Video with your Amazon Prime credentials to start streaming.