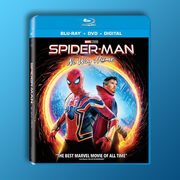 Bring home the biggest movie of the multiverse from Amazon.ca, where Spider-Man: No Way Home is now available on Blu-ray and DVD in Canada.

The home media release is packed with must-watch content for Spidey fans, including over 80 minutes of behind the scenes footage, cast interviews and 20 minutes of deleted scenes featuring Peter-One, Peter-Two and Peter-Three.

Originally released in theatres on December 17, Spider-Man: No Way Home is the newest Spider-Man movie in the Marvel Cinematic Universe and one of the most popular movies of 2021. After Peter Parker's secret identity is revealed to the world, he asks Doctor Strange to restore his secret with magic. When the spell goes awry, supervillains from across the multiverse are unleashed, forcing Spider-Man to face his toughest adversaries yet.

Amazon.ca offers free shipping for all Prime members or on orders over $35.00 for those who aren't members.

While these items were in stock at the listed prices at the time this deal was posted, Amazon practices dynamic product replacement – once their stock of an item is depleted, it may be replaced with the same item sold by a third-party retailer for a different price. Double-check that the listed price and shipping fees we posted are still available before you buy.