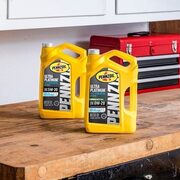 Keep your car in tip-top shape with a new deal from Pennzoil, where you'll get a free $25.00 gift card when you purchase 10L of Pennzoil Platinum Motor Oil.

This offer is available at several Canadian retailers including Amazon.ca, Canadian Tire, PartSource, Walmart and others – simply purchase 10L of Pennzoil Platinum Full Synthetic Motor Oil, then upload your receipt to the Pennzoil Platinum Rewards page to claim your free $25.00 gift card.

We've listed a few eligible products, along with links to Amazon.ca and Walmart – the 10L minimum threshold can be reached by purchasing any combination of 1L or 5L bottles, but they must be in a single transaction from the same retailer to qualify for the gift card.

This offer is effective until October 31, while eligible receipts must be submitted before November 15 to qualify for the $25.00 gift card – click here to read the complete terms and conditions.