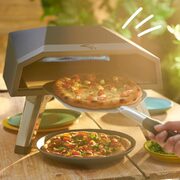 Pizza is one of the most beloved foods in the world, so it's no surprise that one of the most sought-after products in Canada in 2022 is something that claims to make pizza even better – the PC Propane-Powered Pizza Oven.

Originally released in early-2022, the PC Propane-Powered Pizza Oven is a new appliance from President's Choice, capable of reaching a maximum temperature of 500°C to bake restaurant-quality pizza in minutes. Here's where you can find the PC Pizza Oven if you're searching for one this summer.

The PC Propane-Powered Pizza Oven is listed at most Loblaw-owned grocery stores across Canada, but it's already become difficult to find due to mild levels of hype. That hype is expected to grow even more this summer, after President's Choice named the device their #1 pick in the Summer 2022 Insiders Report, along with the label of a "limited quantity" item.

On RedFlagDeals, the oven generated significant buzz in March after it went on sale at Real Canadian Superstore and has earned praise from the online pizza oven community for its value and generous warranty – for reference, the PC Pizza Oven is listed at $299.99 and comes with a five-year warranty, while a similar Ooni Koda Pizza Oven is priced at $479.99 in Canada and comes with a one-year warranty.