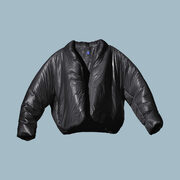 Nab some of the hottest streetwear looks at Gap, where new (and possibly the last) YEEZY GAP styles have officially dropped in Canada.

Originally announced in June 2020, YEEZY GAP is a collaboration between Gap and YEEZY, the streetwear brand founded by Kanye West. This September 2022 drop includes several new fall-themed Balenciaga products like the Long Round Jacket and Round Jacket 2, along with less wacky styles like the Logo Shrunken Hoodie and Fleece Jogging Pant.

Perhaps most notably, this drop is likely the final one ever, after West decided to end his partnership with Gap just two years into their original 10-year deal. Gap later confirmed the news and said the company plans to release any remaining products already in production before winding down the partnership.

These YEEZY GAP styles are available in Canada while supplies last and YEEZY GAP offers a flat-rate shipping fee of $14.00 on all Canadian orders.